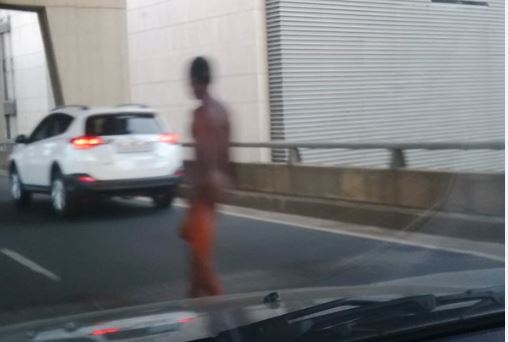 Man walks naked in peak traffic on the M1 highway in Johannesburg.

JOHANNESBURG – A naked man disrupted Thursday morning traffic on the M1 in Johannesburg.

Motorists took to Twitter to voice their anger at being further delayed in peak-hour traffic by the spectacle while others saw the humorous side of it.

Some motorists questioned why authorities had not removed the man, believed to be a vagrant, and arrested him for public indecency.

The Johannesburg Metro Police Department confirmed that the man is homeless and believed to be living on the streets next to the busy highway.

“Every time he saw the police van coming he ran away and jumped down the road.

“We believe that he is mentally disturbed.”

Minnaar said if they were to apprehend the man he would not face any criminal charges, but would be sent to a mental institution.

@CityofJoburgZA there is a naked man on the M1 north before Carr str off ramp. Please inform police

The naked man on the M1 North is causing so much traffic.

Stark naked man on the M1 South. Birthday suit in the rain. Legend.