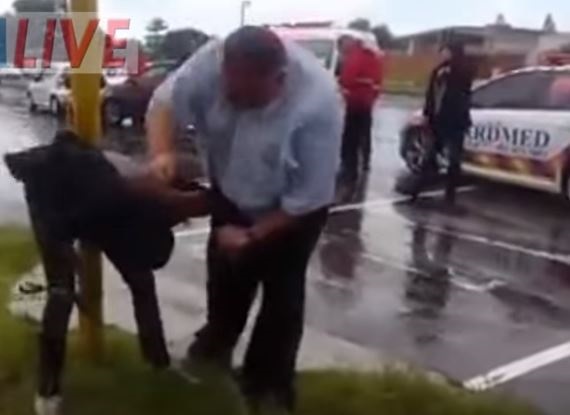 JOHANNESBURG – A road rage video in Port Elizabeth where two men were involved in an altercation at an accident scene, has gone viral.

The Herald uploaded the clip of a visibly upset old man who can be seen beating up a man who does not retaliate.

The man on the receiving end of punches to his lower back and the back of his head can be heard screaming for help.

According to Dave Gardner from Garmed – whose paramedics were at the scene - there was a motor vehicle accident involving a young girl whose car was hit from the back.

The driver of the car that allegedly caused the accident refused to get out of his vehicle and allegedly does not have a driver’s licence or insurance.

The girl apparently called her father and informed him of the incident and upon arrival he lost his temper and started beating up the driver.

“My guys at the scene told me what was happening and I specifically told them to not get involved in any incident that has to do with domestic violence," said Gardner.

“They are not trained to be involved in that.

“We called the police and told the girl’s father that the police were on their way. Just immediately after the recording of the video, the police arrived.”

Local police confirmed that no charges were laid in relation to the incident.