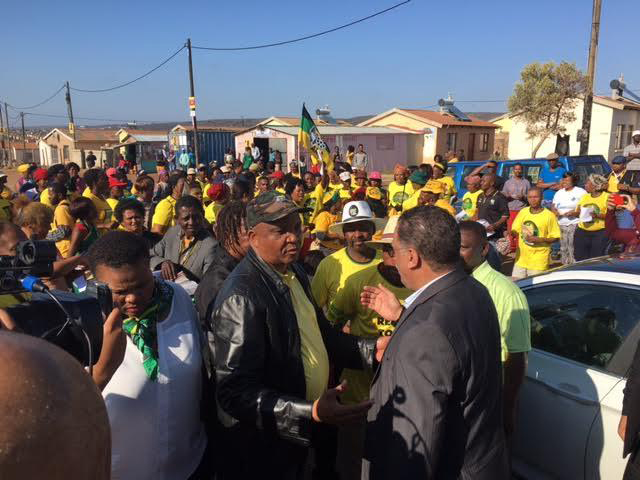 PORT ELIZABETH - Nelson Mandela Bay Mayor Danny Jordaan brought calm to disgruntled residents who were protesting in the city’s Northern Areas on Wednesday, promising he would meet with them again on Thursday to address particular problems in their areas.

Residents from Qunu informal settlement walked over to where Jordaan was conducting door to door visits in ward 29 in Booysens Park.

Addressing Jordaan, Qunu residents complained about evictions, inadequate housing and said they needed basic services like water, electricity and sanitation. Some even asked for the bucket system as a toilet facility and said that they were tired of going into the bush.

Community leader Simphiwe Njebeza told Jordaan said they felt as if the municipality did not take them seriously as their calls for help continued to fall on deaf ears.

"I have been living here since 2014 and we keep trying to address these issues for basic services. We need housing, water and sanitation, that’s all we ask. We go to the municipality but the municipality never come to Qunu," said Njebeza.

He added that they would not be able to vote in the upcoming local government election on August 3 as residents were not registered because they did not have proper addresses.

An elderly woman, Busisiwe Patricia Ngeni, told the mayor that she had lived all over Port Elizabeth and had never had a stable home.

"Two years ago we heard people were invading [Qunu] so we went there. The municipality broke down our houses so we had to move to the bush. My desire is to have a permanent home to live without fear of eviction," she said.

Jordaan told the residents that he was not there to make "empty promises" and disappear after the elections. He said that it was unacceptable that an area carrying the name of former President Nelson Mandela’s home village faced such problems.

"Whose home is that? Mandela’s home, and what do you think Mandela would of told us this morning about Qunu? That we must take care of the people of Qunu. That is what Madiba would of told us. We must work together to solve the problem, not talk, talk and talk," Jordaan said.

"This metro has R603 million for housing, we have the money. This metro is going to build 6,000 houses and we need to sit down with you – to ask when we build the houses, what is the priority? And we will have to work with your leaders to work on the priority. Do not stop engaging," Jordaan told residents.

He further added that an interim solution would be implemented to deal with sanitation and water issues. He encouraged residents to register for the "Assistance To The Poor" programme if they earned less that R3,000 per month.

"Your electricity and water is for free, your ward councillor must sit down and get the names for you to apply, we give immediate relief and we deal with issues we can address immediately.

"Other matters like housing provision, of course we must still build houses, so it’s not going to happen tomorrow. We are not here to make promises so that after the 3rd of August we disappear, we are telling you the truth, Madiba wants us to tell you the truth," he added.

The "Assistance To The Poor" scheme forms part of the metro’s dignity programme and is currently benefiting thousands of residents in Motherwell, Kleinskool, Wells Estate, Walmer Township and Helenvale amongst others.

Jordaan said that the metro was trying to make the programme more accessible to people, and in order to qualify, residents would have to earn less than R3,000 per month or live in a property valued at under R100,000.

"We had to acknowledge that application queues are long and that, in short, the process did not always bring the necessary speedy relief and assistance to needy families. The automatic subsidy that will now be paid will ensure that a significant chunk of approximately 23,000 additional poor households will benefit from the ATTP scheme. We have identified these households from our billing system and we will be sending out letters tomorrow [Thursday]," said Jordaan.

The programme provides 8 kilolitres of water free per month, 75 kilowatts of electricity for free and residents do not pay rates because of their low income bracket.