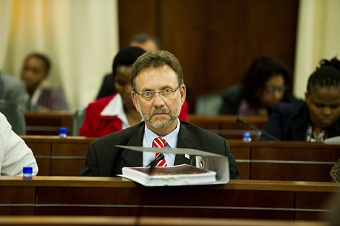 DA MP James Selfe during the ad-hoc committee on Nkandla meeting on April 24, 2014 in Cape Town, South Africa. On Wednesday, he confirmed that national director of public prosecutions had given the DA outstanding 'spytapes' documents.

CAPE TOWN - Lawyers for the Democratic Alliance on Monday advised the party that Police Minister Nathi Nhleko’s 50-page report relieving President Jacob Zuma of any obligation to reimburse the state for improvements to his Nkandla home was ripe for judicial review, James Selfe, the chairman of the party’s federal council said.

“We have received legal advice and the legal advice is that the report is eminently reviewable on the grounds that it is irrational, unconstitutional and by somebody who has a direct interest,” Selfe said.

He said lawyers contended that Nhleko, as a minister reporting to Zuma, arguably lacked the necessary independence to make a determination on the president’s obligations on the matter.

This raises the spectre of a second legal challenge after the Economic Freedom Fighters (EFF) said they have decided to go to court to overturn Nhleko’s report because it unlawfully sought to overturn findings by Public Protector Thuli Madonsela that Zuma unduly benefited from the improvements to his home and should pay for features that do not pertain to security.

Nhleko’s widely mocked report made the case that a R3.9 million swimming pool, kraal, amphitheatre and visitor’s centre all doubled up as security assets.

It is, however, expected that the DA will not rush to court on Tuesday morning, but wait to see how Parliament opts to proceed with the report. The legislature was scheduled to set up an ad hoc committee this week to process the report and then advise the National Assembly whether to adopt it.

On Monday morning, the DA wrote to Speaker Baleka Mbete and urged her to halt this process.

In a letter to Mbete, the party wrote: “Parliament should not consider it because it is irrational and unconstitutional.” The letter went on to reiterate its view that Nhleko did not have the power to substitute Madonsela’s directive that Zuma was liable to refund the state for luxuries added to his home with different findings exonerating the president.

The EFF also plans to base its legal challenge on arguments that the president and his ministers cannot overturn the Public Protector’s findings.

A long-running debate between the ruling party and the opposition over the status of the Chapter 9 institution’s findings came to a head last year after Madonsela released her report on Nkandla, titled “Secure in Comfort” and saw the opposition withdraw from an ad hoc committee that was set up to consider various investigations into the Nkandla scandal and the president’s response to them.

EFF leader Julius Malema and the DA’s Mmusi Maimane led the walkout after the ANC said it would not accept Madonsela’s findings as binding, or call for independent legal opinion on their status.

This issue has been heading for a landmark ruling in the Supreme Court of Appeal since last month when Western Cape High Court judge Ashton Schippers granted an appeal in the DA’s court case against the SABC and its chief operating officer Hlaudi Motsoeneng, saying he was doing so because it was in the public interest that the court pronounce on the extent of the Public Protector’s powers.

The Constitutional Court has never delivered a definitive pronouncement on whether the remedial action imposed by the Public Protector is legally binding. Commenting on the Nhleko report, constitutional law expert Pierre de Vos cited Schippers’s own ruling on the matter last year, where he found that these were not legally binding, but organs of state must have cogent reasons for refusing to implement them.

“If it is assumed for the moment that the High Court judgment dealing with the powers of the Public Protector is correct, the President would have to show that “cogent reasons” exist that allows him to ignore the findings and remedial action of the Public Protector on Nkandla. It is unclear whether such reasons indeed exist,” he said.