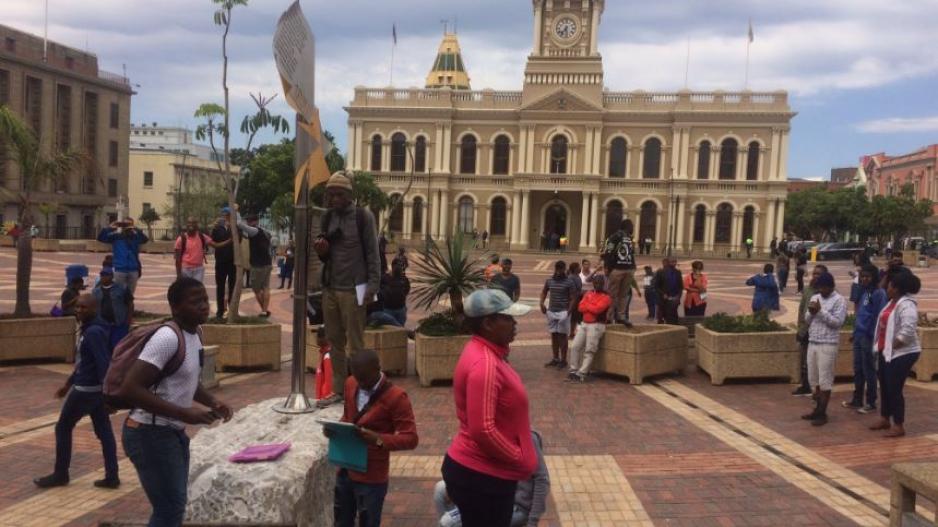 The meeting on Monday is expected to address challenges students face around the fight for free tertiary education.

PORT ELIZABETH – Allegations of attempted bribery, third force involvement and apparent factionalism amongst students have surfaced in the ongoing Fees Must Fall protests which have brought Nelson Mandela Metropolitan University (NMMU) to a shutdown since early last week.

Other immediate issues relate to debt relief, assistance for the “missing middle”, outsourcing and allowances.

The gathering outside the building was illegal and later moved inside City Hall’s auditorium, where students and parents were addressed by SRC President Nicholas Nyati and Member of Parliament Yusuf Cassim.

Since last week, nine students have been arrested following protest marches to the Boardwalk entertainment premises which turned violent.

They are facing charges relating to public violence, contravention of the national roads act and obstructing police officials in the execution of their duties.

The six female and three male students were released on bail last week.

Addressing the crowd, Nyati said that while the SRC supported the cause for free quality education it did not support the shutting down of the institution.

“We had to make a very unpopular decision to say we want our classes to continue, we made this decision knowing that there would be consequences, where people will attack us, call us names, but our duty is not to be popular. Our duty is to be morally and consciously correct,” said Nyati.

Nyati said that he had received a text message last week from a student leader, stating that the taxi association would join the protest action if they were given a tender for a shuttle service, once classes had resumed.

“I received a text from a student leader last week Thursday, he was saying, ‘Nic, we need the taxi associations to support the march’, then he said there is a condition…’You need to promise as President that when schools go back to normal the taxi drivers will get the tender for shuttles.”

Nyati also said that at one point last week he needed airtime to call the police, but he was told by certain individuals that he “should not worry” as there were people “funding” the students’ protest action.

He added that SRC members had been threatened by several student leaders who were reportedly unhappy with the decisions taken by the SRC.

Nyati said that the ongoing protest had caused him to have “sleepless nights” and further called upon the Port Elizabeth community to unite as to ensure the re-opening of NMMU.

“We need to unite and take the fight to the government… We have SARS [the South African Revenue Service], a branch of treasury who have direct contact with national, it’s very important how we take the fight to SARS…As the SRC we are going to submit a memorandum to SARS and state we agree with the cause and secondly the [Fees] Commission we want them to report as early as December because July is too late it’s after the budget speech,” he said.

Students claimed to be from the Fees Must Fall movement, but many of the students were dressed in t-shirts and headgear representing the Economic Freedom Fighters (EFF) and SA Students Congress (SASCO).

Students from the FeesMustFall movement, an apolitical organisation, have reportedly called for the exclusion of Daso members from the group as well as the resignation of SRC members.

Outside City Hall, members of the Public Order Policing Unit were at the ready with water cannons. Security officials were on high alert while protest action continued with some students refusing to disperse while others made their way to NMMU for another meeting.

NMMU student Sumaya Amod, attended the meeting with her family and said that there appeared to be uncertainty on a way forward.

“I came here today [Monday] to find out what is the general consensus, are things going to be cancelled for the rest of the year? There is so much uncertainty we have no idea what is going to happen, one moment there’s a notice about how we going back next minute classes are cancelled.”

She added that the apparent divisions amongst students were unsettling and said politics had nothing to do with the students’ right to education.

“The factionalism is confusing because you have one group agreeing to one thing and another group against another group, [there is] just no unity amongst the students,” said Amod.