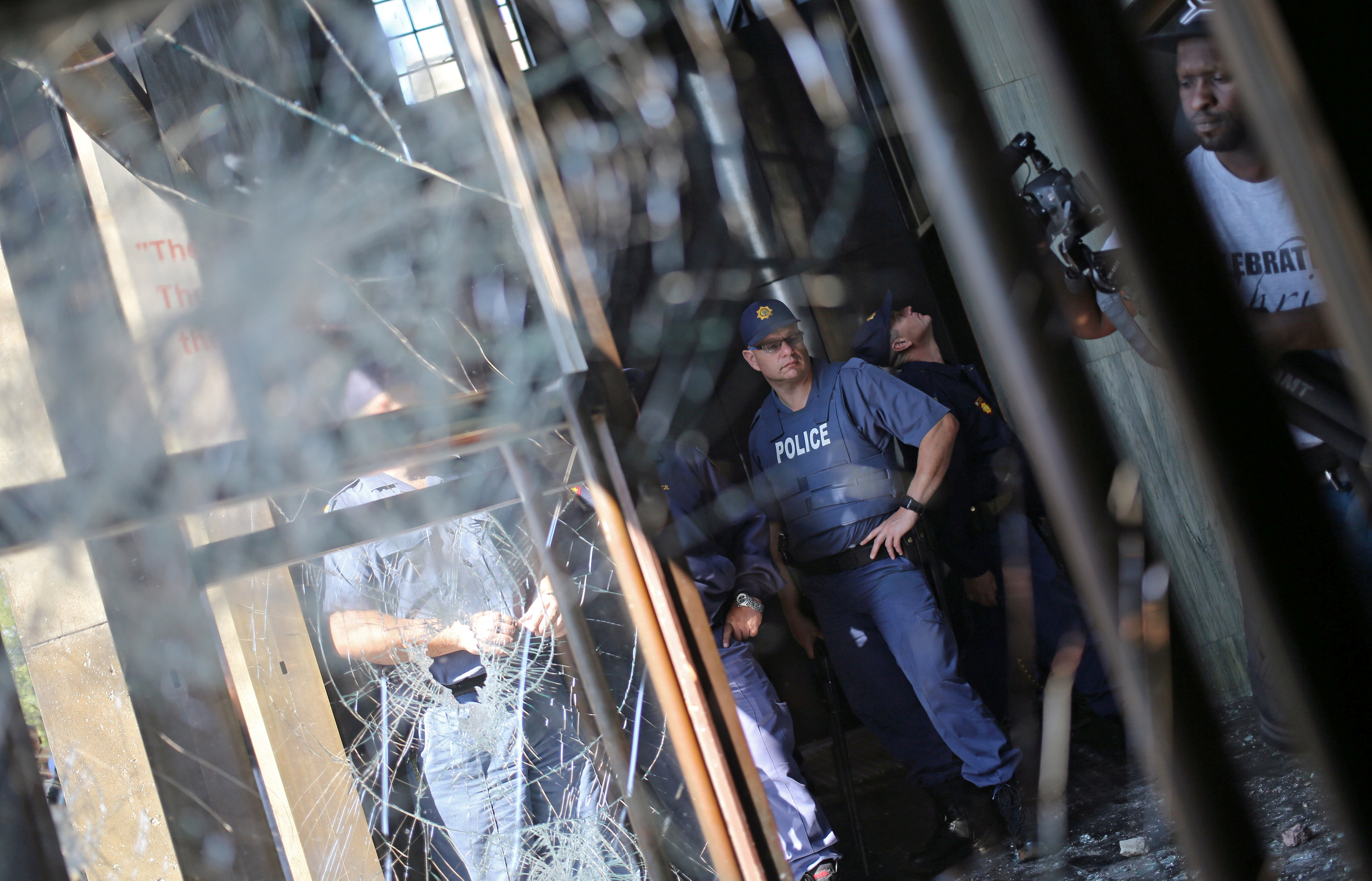 A police officer looks at a damaged window after students clashed with security at Wits as countrywide protests demanding free tertiary education entered a third week.

JOHANNESBURG - The violent protests at some universities that led to damage of property and has interfered with academic programmes are wholly unacceptable, Higher Education and Training Minister Blade Nzimande said on Tuesday.

“It is most disturbing to see such violent protests inflamed by rogue elements after wide consultation was undertaken on the measures announced this week to address the ongoing issue of university fees. Government has heeded the call of students by subsiding fee increase in 2017 to poor, working class and ‘missing middle’ students,” he said in a statement.

“We cannot subsidise all students in the same manner. Those from households with an income per annum of below R600,000 have been assisted by the gap funding from government as announced this week. Those with the means to do so should contribute to increasing university costs by paying fees. Fees remain a significant income stream for universities, together with government subsidies and third stream income.”

Nzimande strongly condemned the violent student protests and said government had gone a long way to accommodate poor students and those in the missing middle by exempting them from any fee increase in the 2017 academic year.

He said the dialogue with students should continue; but damage to property and violence could not be tolerated.

“I wish to reiterate to student leaders that my door is always open for any further engagement and discussion. However, such engagements cannot take place in an environment of violence and destruction,” Nzimande said.

“Our youth must be careful not to destroy their heritage, their universities which we must protect and preserve as institutions of academic excellence for them and for generations to come.”

He also called on law enforcement agencies to act immediately and within the boundaries of their mandate against any “hooliganism” that results in in violence and destruction.

Vice chancellors should also tighten up security and take any measures necessary to prevent any form of violence and destruction of property, he said.

On Tuesday morning, police arrested 10 protesting students for blocking an entrance at Witwatersrand University, spokeswoman Shirona Patel said. A group of about 50 students had gathered at Braamfontein campus early in the morning. They allegedly prevented vehicles from entering or leaving the university.

Security has been tightened after students held a meeting on Monday night and vowed to shut down academic activities against 2017 tuition fee hike.

Police later had to use more than five stun grenades to disperse hundreds of protesting students who were making their way to the Wits Education campus. Hours after police arrested as about 30 students, protesters moved from the main campus to the education campus in Park Town.

The protests spread to several different universities in the country and the University of KwaZulu-Natal students who marched on the KwaZulu-Natal legislature in Pietermaritzburg threatened to keep the institution closed until its demand for no increases in fees was met.

On Monday, Nzimande announced that universities are allowed to decide on and increase their fees for 2017. The increases are however capped at eight percent.

Ndizmande said the government will assist qualifying students to fund the gap between the 2015 fee and the adjusted 2017 fee at their institution. He said it was estimated the move would cost the government about R2.5-billion.

“We wish to condemn in the strongest terms possible the ugly scenes captured on camera by media and in particular the conduct of the private security who demonstrated poor crowd control and violated protocol and procedures for dealing with what was initially a peaceful protest,” SANCO spokesperson Jabu Mahlangu said.

“It suggest that they are either poorly trained or didn’t have an effective security plan, crowd management strategy,adequate equipment and or manpower to deal with the situation that unfolded.”

He said that the use of excessive force and violence to deal with protests was likely to “invite violent retaliation” which could result in the destruction of public property and injury.