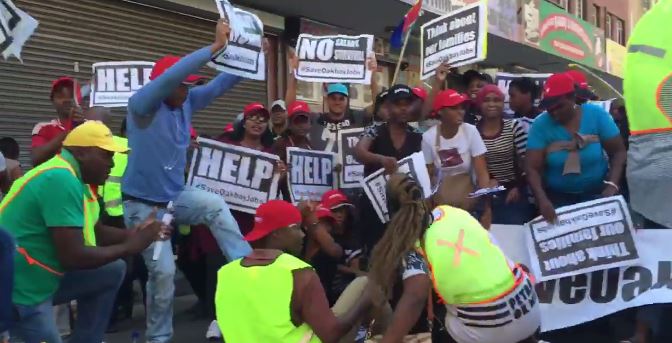 Hundreds of workers from Gupta family-owned Oakbay Investments are marching to the banks in an effort to save their jobs.

JOHANNESBURG - Oakbay Investments have released a media statement in response to adverse reports about its contracts to supply Eskom with coal.

They claim that certain media outlets are "trying to create a narrative that Oakbay’s mining activities represent a conflict between the Company’s majority shareholders and the Treasury."

In the press statement Oakbay Investments and Tegeta said they had "noted press coverage in recent days surrounding the Company’s contracts with Eskom and coal supply from the Brakfontein mine.

"We strongly believe we have done nothing wrong and have followed every policy and process correctly and have no issue with government or a regulatory body reviewing our activity.

"At the time of the Treasury’s request to release its report, Tegeta offered to participate and assist with the provision of relevant facts and accurate data ahead of release of the report.

"We believe that any Report publicly released should be accurate. We also believe that our input would enhance its accuracy ahead of the report being made public

"The companies within the group have no direct relationship with Treasury, and are fully supportive of the work being done by Treasury to create an environment conducive to growing South Africa’s economy."

The press statement also noted that the Gupta family no longer had any executive or non-executive role at Oakbay Investments.