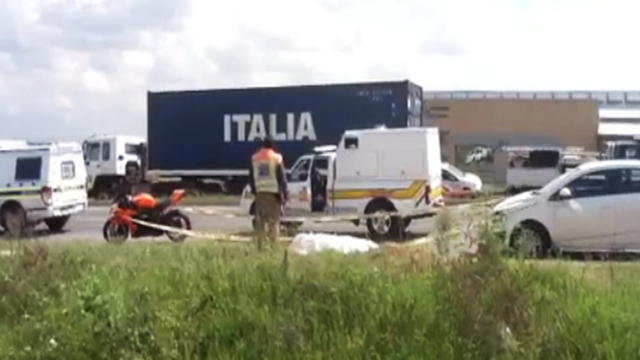 JOHANNESBURG - A motorcyclist was shot dead in Northriding on Friday in what is suspected to have been a road rage incident.

The South African Police Service (SAPS) confirmed the 39-year-old rider was shot at approximately 7am.

According to police spokesman Lt-Gen Katlego Mogale, the motorcyclist confronted a motorist with a gun following an argument.

The driver, who was also armed, then shot and killed the motorcyclist.

The wounded 44-year-old driver of the car was treated on the scene by paramedics before being transported to hospital under police guard, said JMPD spokesperson, Edna Mamonyane.

She could not immediately confirm reports that the man was shot by the motorcyclist.

Netcare 911 spokeswoman Santi Steinmann said the man was in a serious condition.

Police investigations are underway. A case of murder has been opened, Mogale told eNCA.com, and the motorist is currently under police guard at hospital.

Mogale said he will be questioned as soon as he is in a reasonable state.

"Like everyone else, he will also have his day in court," Mogale added.

http://t.co/Kfcpej5THK A pic of the scene where the motorcyclist was gunned down after road rage incident. Shooter transported to hospital.

ATT Motorist shot a motorcyclist dead at corner Boundary and Malibongwe. Any witnesses urged to please come forward and call 10111

A shooting incident on Malibongwe Drive in Randburg left one man injured & one man dead.

On a day dedicated to love, another tragic shooting! RoadRage! Really very sad! Again I say we need divine intervention!

I need to be serious about my roadrage,that could have been me! roadrage

One mans life lost and anothers ruined. One moment of anger can change everything roadrage

This roadrage incident from this morning has really hit home, im a bit of a shit on my bike...need to be better, don&39;t want a bullet.

RoadRage Police have confiscated firearms from both men and are inspecting them.LN pic.twitter.com/8MceuAuOEq

http://t.co/JArDUhq1xl UPDATE Another pic of the fatal shooting. Hope people will learn from this and be less inclided to threaten others.