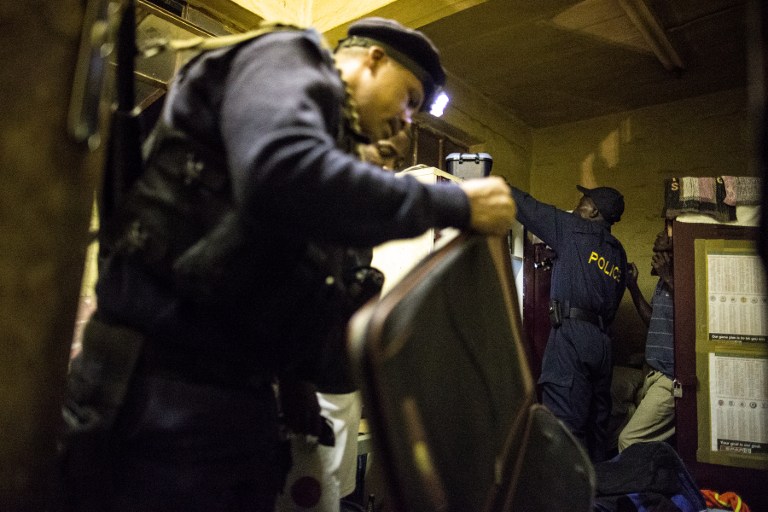 Policemen proceed with a search for drugs and weapons during a raid in Jeppestown.

PRETORIA – Government will not be putting an end to the raids that are part of operation Fiyela, a programme to eliminate criminal activity in hotspots across South Africa.

Minister in the Presidency Jeff Radebe says the multi-pronged project which was launch after the xenophobic violence in April has been successful and will continue for months to come.

“We will, in the next weeks and months, accelerate our efforts to take back public buildings that have been hijacked, either by foreign nationals or by South Africans; rid our townships and villages of drugs such as nyaope, wunga and tik that are destroying the lives of many young people,” Radebe told reporters in Pretoria.

“The IMC (inter-ministerial committee on migration) wishes to emphasise that we expect all people living in South Africa to respect the laws of the country. We are going to continue to arrest and repatriate those who have been found to have contravened our immigration laws.”

He said government was pleased with the progress made under the operation, involving the police and the South African National Defence Force.

“A total number of 3 914 arrests were recorded on various integrated operations under Operation Fiyela in all provinces. These arrests are in relation to various crime categories,” said Radebe.

Listing the Operation Fiela successes, Radebe said on May 4, two Ethiopians were arrested for alleged human trafficking. At least 19 Ethiopians were found in a shop where the duo would allegedly sell them on.

“On May 4, a Zimbabwean male was arrested at Beit Bridge border post in possession of explosives to the value of R100,000,” he said.

“On May 9, information officers of the National Intervention Unit in Pretoria followed up information regarding wanted murder suspects in the Dobsonville area. The members arrested two murder suspects and recovered two unlicensed firearms and 16 rounds of ammunition.”

A Mozambican national was arrested at the Lebombo border post with more than two kilogrammes of ephedrine worth R693,000 last month he added.

Radebe said on May 13, copper and gold to the tune of R24 million was seized at the Beit Bridge border post.

Radebe said another raid was successfully conducted in Pretoria central and the populous Sunnyside area on Saturday evening. He said successes in the Pretoria raid included seizure of liquor, recovery of one hijacked truck, the arrest of seven people for theft, 14 people arrested for driving under the influence of alcohol. A total of 16 undocumented migrants were arrested during the raid.

“As we move forward, we are motivated by the overwhelming positive feedback we are receiving from communities about Operation Fiela. We would like to urge all people in South Africa to play their part in ridding our communities of crime,” said Radebe.

The state security operation has been widely criticised by civic society as “state-sponsored xenophobia”.

Speaking to journalists in Johannesburg following a three-day ANC national executive committee meeting, African National Congress secretary Gwede Mantashe said,”The operation is not harassment at all. This is an effort to regulate everyone in the country.”

“Operation Fiyela strives to apprehend and disarm those with illegal firearms in society, it is meant to discover and disarm everybody, foreign and national in the country,” he added.

It was launched by government following a spate of xenophobic attacks which left at least seven people dead in Gauteng and KwaZulu-Natal.

Numerous criminal cases were opened after the xenophobic attacks. Of the 87 cases, 83 had been postponed for further investigations. Four cases had been concluded in KwaZulu-Natal.

At least 5 645 persons had been voluntarily repatriated to countries including Malawi, Mozambique, Zimbabwe and Tanzania after the attacks. At least 418 people had been deported to Mozambique.