Opposition MPs to Mbete: 'You must go' 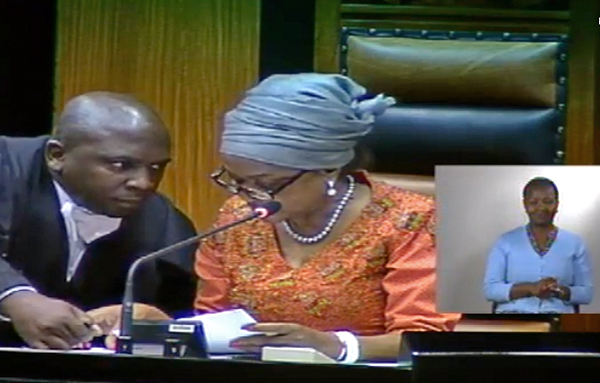 Speaker of the National Assembly Baleka Mbete consults as the House erupts in chaos, 13 November 2014

PARLIAMENT - Opposition MPs chanted "You must go" in the National Assembly on Thursday after calls from DA chief whip John Steenhuisen called on National Assembly speaker Baleka Mbete to step down from her position to which she replied, "You wish" during an parliamentary uproar.

This was during a fiery and disorderly opening of parliament on Thursday in which the final Nkandla report into upgrades at President Jacob Zuma’s private home was set to be tabled.

In what appeared to be a loss of control from the parliamentary speaker, leading opposition MPs refused to obey instructions from Speaker Mbete.

Deputy chief whip of the Democratic Alliance Mike Waters was ordered to leave the House for ignoring Mbete&39;s repeated instructions to take his seat.
Waters refused to leave the chamber, as numerous MPs rose at the same time to raise points of order after Mbete made a ruling regarding the day&39;s order paper.
At the same time, MPs in the opposition benches banged on their tables and started chanting "You must go" to Mbete.

John Steenhuisen, DA chief whip called on Mbete to step down and surrender the chair.

"Madam Speaker, due to the unforeseen circumstances today under Rule 2, under which you have made this ridiculous ruling today to suit the ruling alliance and protect your party from any act of mutiny of the parliamentary rules I would ask, Madam Speaker, with respect, that you surrender your Chair to the honourable Frolick so that some order can be restored to this House so that we can proceed with the business of the day. You have lost control of the House for the second time, Madam Speaker. You are pushing us to a constitutional crisis and I would ask that in the interests of this institution you step down from the Chair so that we can proceed with the business of the day."
Mbete replied, "You wish."
The final Nkandla report into upgrades at . Opposition MPs are demanding that the Nkandla report be debated first.