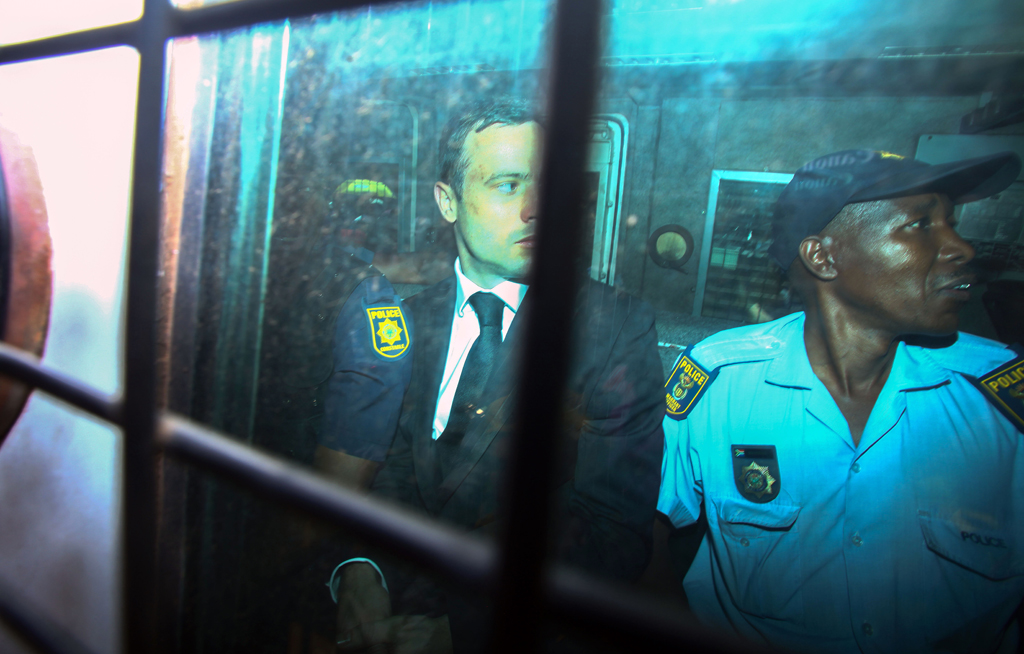 Members of the South African Police Service with Oscar Pistorius (L) in the back of an armoured police vehicle as he is transported away from the High Court in Pretoria, South Africa 21 October 2014.

JOHANNESBURG – Oscar Pistorius will be spending his 28th birthday behind bars and is unlikely to get any cake.

But he could get stationary, cigarettes or toiletries from family members as part of his normal monthly allowance of purchases visitors can make for him.

According to the biography on his website, Pistorius was born on November 22, 1986.

Pistorius is currently serving time at the Kgosi Mampuri Correctional Centre in Pretoria, as a result of a culpable homicide conviction for causing the death of his girlfriend Reeva Steenkamp.

However, Pistorius is luckier than many of his fellow inmates in one regard – his birthday falls on a Saturday, a day designated for visiting.

The Department of Correctional Services says inmates are allowed a maximum of two visitors, depending on which group they have been placed in.

Correctional Services spokesman Logan Maistry said the department would not comment on enquiries about a particular prisoner, but said “no extended visiting hours are provided to inmates during their birthdays.”

And the department had similar rules when it came to presents.

“For sentenced offenders, generally, no items are allowed except for, perhaps, birthday cards,” Maistry said.

However, Pistorius’s family might be able to purchase treats at the prison kiosk – according to the department’s website, visitors can buy items at the kiosk which can be consumed by the inmate during visiting hours.

Prisoners are allowed different privileges based on the group they have been placed in upon admission to a correctional facility.

Inmates’ families are also allowed to provide items such as toiletries, stationary, batteries for a radio or battery operated shaver, a telephone card or postage stamps. The department has limited the purchase amount to R250 for Group C prisoners, who have the least privileges.

Prisoners in all three categories are allowed to keep photo-albums, with a maximum of 20 photos or they can keep six loose photos. It is not clear which category Pistorius has been placed in.

Pistorius was sentenced to a maximum of five years in jail for the February 14 shooting.