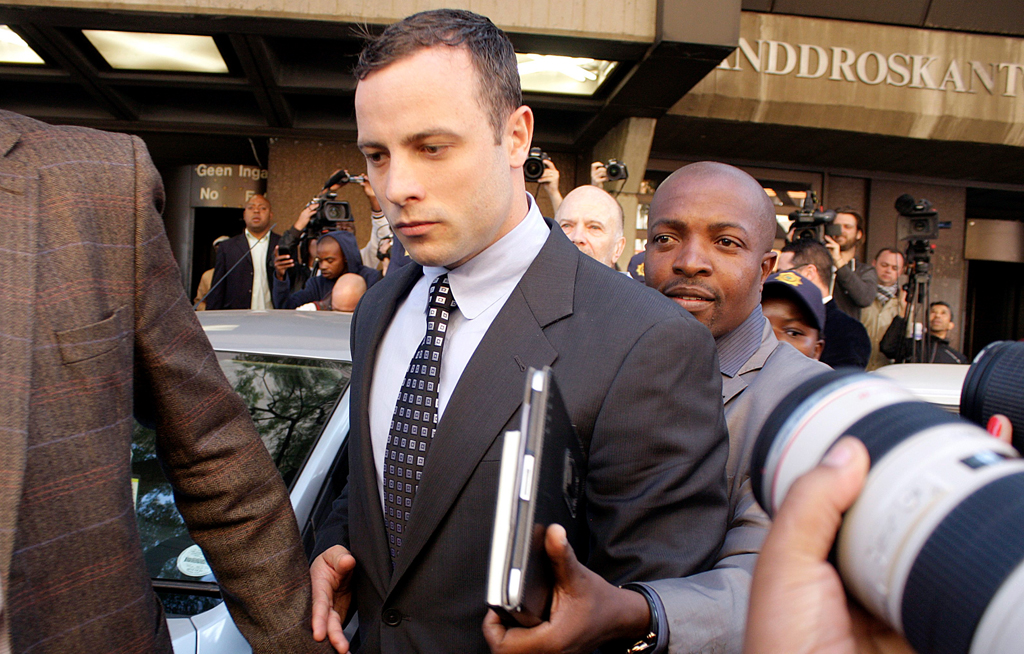 Oscar Pistorius appears in the Pretoria Magistrates court on June 4, 2013, in Pretoria. This is his first appearance ahead of his murder trial.

JOHANNESBURG - Prosecutors have named 107 witnesses they can call at Oscar Pistorius&39; trial. Here&39;s a look at some of them and what they might testify about:

WHO SCREAMED AND WHEN?

Did Steenkamp scream before she was shot? Prosecutors maintain they have witnesses who will testify to events that contradict Pistorius&39; story and suggest there was an argument before she was shot dead. Twenty people -neighbors, security guards and other workers - who are connected to the gated estate where Pistorius lived are on the witness list. Witnesses "heard a woman scream, followed by moments of silence, then heard gunshots and then more screaming," prosecutors say in indictment papers. Pistorius says that he was the only person to scream before shooting Steenkamp through the toilet door and he did that to tell any intruder he thought was there to get out of his house.

Was Pistorius walking on his stumps, as he says, vulnerable and fearful when he shot? What do the grouping of the shots fired through the door and the trajectory of the fatal bullets show?
Prosecutors allege that Pistorius fired with a cold intention to kill and not in the way someone who was panicked and trying to make an intruder leave his home would. Bullet holes close together could show that he didn&39;t fire a warning shot as someone might when acting in self-defense. Blood spatter experts will say what position Steenkamp was in when she was hit by the three bullets and whether she was on the toilet or hiding behind the door - maybe hiding from Pistorius.
Prosecutors have at least 10 criminal experts listed as witnesses, including forensic and ballistics specialists and criminal psychologists, but also may have to concede that Pistorius had not put on his prosthetic legs, as they maintained, if the bullet holes are lower down. That could be a blow to the state&39;s case as they say he put on his legs while planning the killing.

PISTORIUS: RECKLESS - OR WORSE - WITH GUNS?

Pistorius&39; past behavior with guns will almost certainly be scrutinized after prosecutors indicated they will add two other firearm-related charges. The details of the charges, not yet clarified, reportedly revolve around one incident when Pistorius allegedly fired a gun out of the sunroof of a car and another event, weeks before the killing, when he fired a gun by mistake in a restaurant.
In the first, Pistorius allegedly fired angrily out the sunroof after an altercation with traffic police in 2012. Samantha Taylor, Pistorius&39; ex-girlfriend, and friend Darren Fresco are believed to have also been in the car and are witnesses.

Pistorius&39; uncle Arnold, brother Carl and sister Aimee are witnesses for the state, as are some of his friends, with prosecutors alleging that Pistorius may have made up his story and then phoned family and friends after the shooting. Who did Pistorius speak to after the shooting and what did he say? Pistorius doesn&39;t mention calling or speaking with family or friends directly after the shooting.

FIRST ON THE SCENE

Pistorius named Johan Stander, a manager at his gated estate, as the first person he called to get an ambulance after shooting Steenkamp. Pistorius says he then called paramedics. An unnamed doctor who lives nearby arrived at Pistorius&39; home with Stander, the athlete says, and their testimony on Pistorius&39; demeanor could be enlightening. Prosecutors say it was security guards who Pistorius first "walked into" when he carried a dying Steenkamp downstairs.