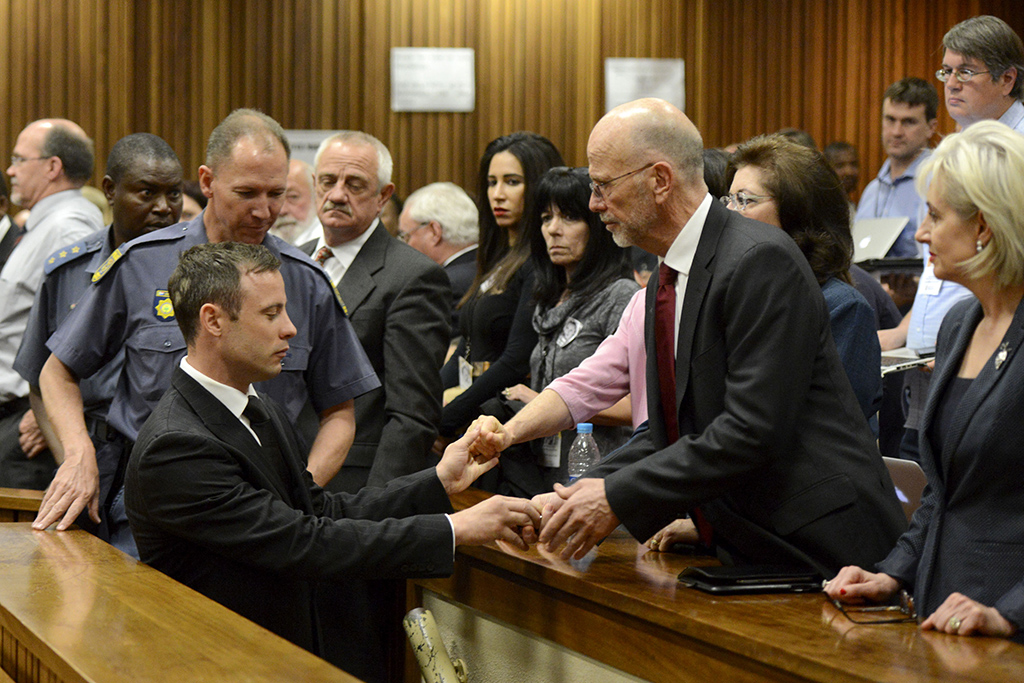 Oscar Pistorius holds the hands of family members as he is taken down to the holding cells after being sentenced to five years imprisonment for the culpable homicide killing of his girlfriend Reeva Steenkamp.

PRETORIA - Paralympian Oscar Pistorius is going to jail. A correctional services spokesperson said, "He is incarcerated now. He can&39;t go home. His status has changed."

Judge Thokozile Masipa has sentenced the athlete to a five year sentence for culpable homicide on Thursday, October 21. Pistorius shot and killed his then girlfriend Reeva Steenkamp on February 14, 2013.

Moments after Judge Masipa handed down her sentence court adjourned and Pistorius was escorted to a holding cell at the North Gauteng High Court.

At 11:00 reporter Annika Larsen reported live on eNCA that she saw a relative hand Pistorius a bag as he made his way to the cell.

Advocate Barry Roux, who represented Pistorius in the 48 days of court proceedings, said that appeals needed to be made within 14 days of sentencing.

He was answering a question from Larsen as he left court, but did not say if his client had plans to appeal the sentence.

Asked if he and his family felt a sense of closure Barry Steenkamp said, "We hope so, yes."

"If he has not been granted appeal and bail pending appeal, it means he must go straight to a correctional services facility," said Mhaga.

He said that officers from the South African Police Service (SAPS) would transport Pistorius to a correctional facility."

eNCA group news editor Ben Said reported, "He will be fingerprinted before, we assume, going to Kgosi Mampuru prison."

Once he is here, he will be fingerprinted again, to make sure those who are sentenced at court are those who arrive at prison and are incarcerated, reported Said.

"After that he will be strip-searched, he will hand over his valuables, and he will be given prison clothes, those orange jumpsuits."

Speaking on the process of going to prison following Masipa&39;s sentencing Mhaga said, "Today he must go there."

By 11:30 the athlete had still not been transported from court to a medical wing at Kgosi Mampuru II prison which is about three kilometres from the North Gauteng High Court.