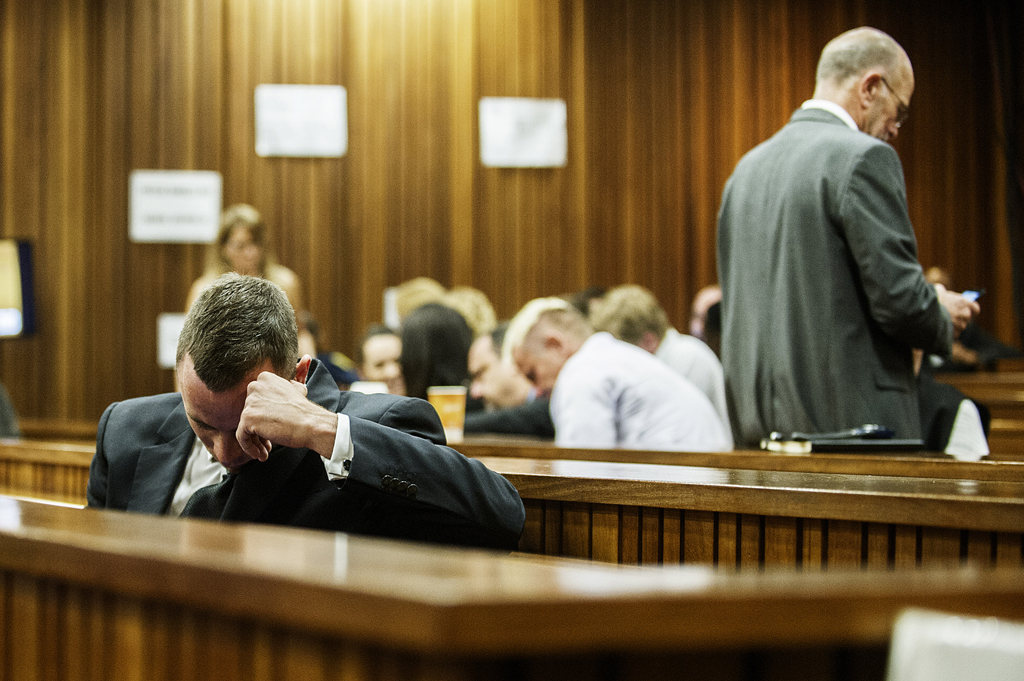 South African paralympic sprinter Oscar Pistorius reads a document ahead of his murder trial at North Gauteng High Court in Pretoria on Thursday, 8 May 2014.

Pistorius is on trial for murdering Steenkamp by shooting her four times through a locked toilet door.

State ballistics expert Chris Mangena testified that four shots were fired through the door. The first shot hit Steenkamp in the hit, the second missed her, the third hit her in the arm as she was falling and pulling her arms up in a defensive gesture, protecting her head and the final shot hit her head.

Wolmarans, who spent many years as a ballistics expert in the police, told the court he has done more than 10 000 forensic investigations and has testified in more than 500 cases over the course of his career.

Wolmarans told the Pretoria High Court that he had found additional evidence that the state had missed. But putting on rubber gloves and feeling around in the toilet bowl, he picked up a piece of core bullet fragment and a piece of tile.

Explaining his involvement in the reconstruction of the shooting, Wolmarans said he had looked at the bullet trajectories and angles.

He did not believe it was possible to say exactly what path each bullet had travelled. It was also difficult to determine  in what exact position Steenkamp had been when she was struck by each bullet.

He used stark, bland language when referring to Steenkamp’s injuries, speaking about wound measurements and the evidence of contusions.

He will return to the stand when the case resumes on Friday.

Earlier during the day a social worker assigned to assess and support Oscar Pistorius after his arrest for the murder of  Steenkamp believes the Paralympian was genuinely heartbroken by her death.

Yvette van Schalkwyk was so upset by newspaper reports that Pistorius had taken acting lessons, was insincere in his reporse and was manipulative in his public displays of emotion that she had come forward of her own volition.

Van Schalkwyk said she wanted to tell the court what she had observed during the time she spent accompanying him in court and meeting with him weekly as had been required by his early bail conditions.

She said she had been asked to meet with Pistorius during his first court appearance and during his bail application to assess his mental health and emotional state.

“He was a man heartbroken about loss. He cried, he suffered emotionally and was extremely concerned about the parents,” Van Schalkwyk said, adding that Pistorius had been worried about Steenkamp’s parents and their loss.

Prosecutor Gerrie Nel said he objected to Van Schalkwyk giving evidence, saying her testimony was irrelevant to the charges against Pistorius.

Van Schalkwyk said Pistorius spoke to her about his girlfriend and their plans for the future.

“What I saw was a heartbroken man,” she said.

She said Pistorius was seeing a psychologist on a regular basis and in this way was handling his mental state. Pistorius was not suicidal, he was heartbroken but was coping with his situation. Pistorius was compliant with all his bail conditions.

During the bail application Van Schalkwyk sat with Pistorius in the the cells. He vomited twice and on one occasion he sat on the floor and cried uncontrollably and needed help to get up.

Follow up consultations happened for the most part at his home.

Nel asked Van Schalkwyk if Pistorius felt sorry for himself – she said she did not believe this to be the case, although his sorrow revolved around his loss.

Van Schalkwyk met Pistorius for the first time on February 15, and his first words to her was that he “missed Reeva so much”. Later that day he said he had shot her accidentally.

Nel said Pistorius’s version was that he shot in the belief that he was under attack.

Van Schalkwyk said she was upset by newspaper reports that Pistorius had been insincere in his feelings and was manipulative.

“What would you expect the normal emotions of a person to be after they have shot someone?” Nel asked.

Van Schalkwyk said she did not know as people would react differently. She admitted that she had never assisted any other accused in a family murder situation and had nothing with which to compare her experience.