Oscar Trial: In his own words 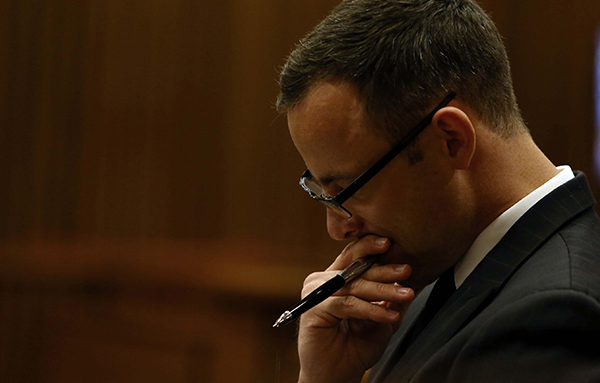 Pretoria, March 26 Oscar Pistorius on trial at the Gauteng North High Court for the murder of his model girlfriend, Reeva Steenkamp.

PRETORIA - Oscar Pistorius is expected to take the stand in his own defence on Friday morning.

Although he’s likely to testify when court proceedings resume in Pretoria, it&39;s possible the athlete will apply to postpone his testimony to a later date.

Since the trial began the state has gone to great lengths to portray the athlete as gun-obsessed and reckless with firearms, and now Pistorius has the chance to tell the world his version of how Steenkamp died.

By analysing the couple&39;s intimate cellphone messages, the state has tried to show that Pistorius was a jealous lover, prone to tantrums, and a man who Steenkamp said sometimes scared her.

The defence has countered this by pointing out that the vast majority of the couple&39;s interactions show they were madly in love.

On the day Steenkamp was killed, several neighbours have testified they heard screams and then gunshots.

The state&39;s ballistics expert believes there was a pause between the first shot and the last three, while Pistorius claims he fired four times in quick succession.

Although the athlete has the option not to testify, his defence team has always said that he will.

“What he says in his Section 115 plea, the reason why he pleads not guilty, that’s not evidence until its tested. So if you were going to use that as evidence, it&39;s preferable to call your client to support that or support your version," said criminal lawyer Mannie Witz.

Hearing the athlete testify, in his own words, will give invaluable insight into his state of mind in the moments before Steenkamp was killed, and the defence has indicated its forensic experts will support Pistorius&39;s testimony.

“The difficulty with relying on forensic evidence and other evidence, especially in a case like this where you are essentially the only person who was there when the incidents took place and you are actually best placed to give an account of what really happened,” said criminal lawyer Tyrone Maseko.