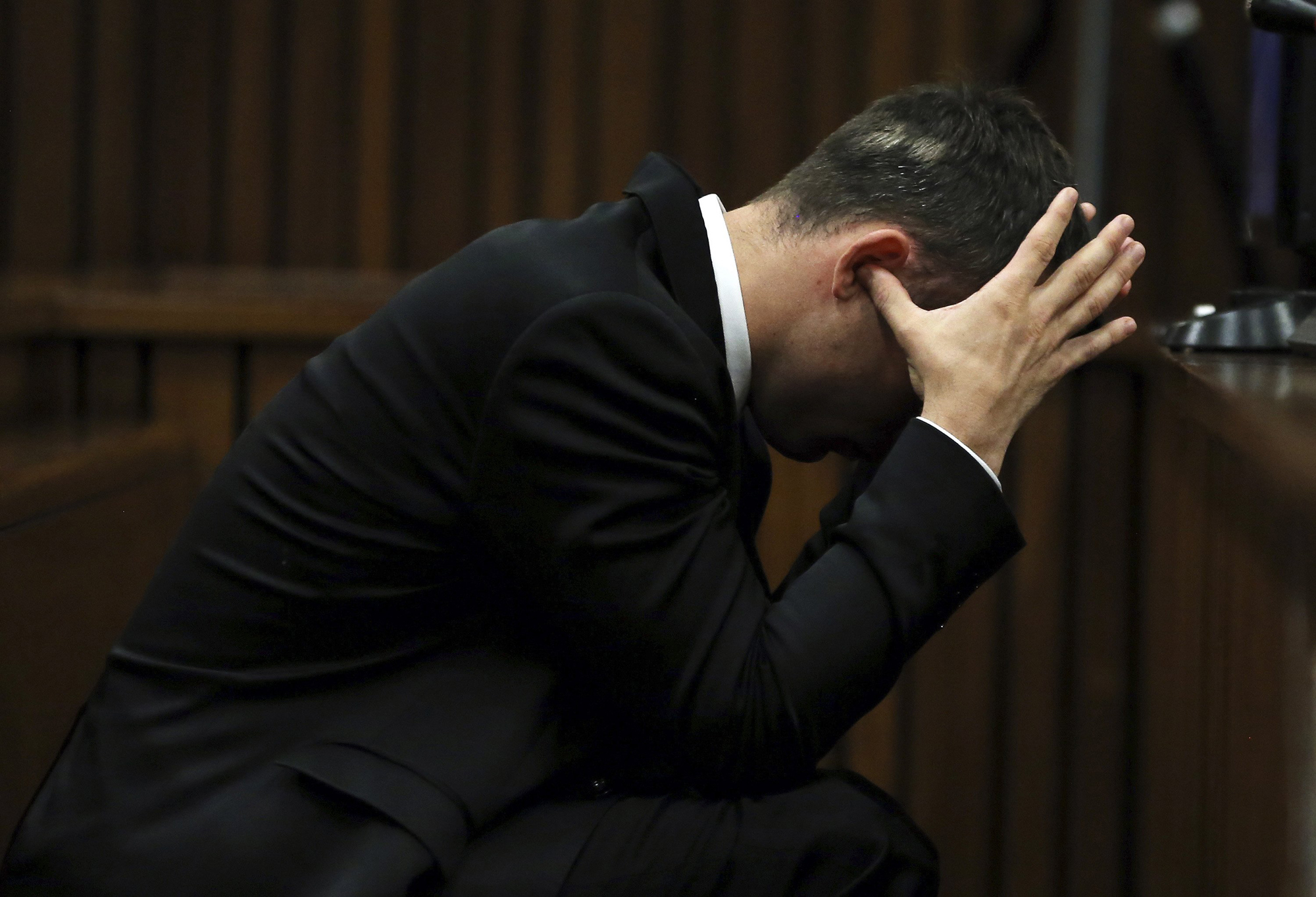 Oscar Pistorius reacts during his trial at the high court in Pretoria April 7, 2014.

PRETORIA - Shuffling on his stumps, overwhelmed by fear, his right hand outstretched pointing his firearm and his left hand trailing along the wall to balance him, Oscar Pistorius peered into the bathroom and saw his toilet door was closed.

“Before I knew it, I fired four shots at the door,” he tearfully told the North Gauteng High Court on Tuesday afternoon as he described the events that led to his shooting Reeva Steenkamp dead.

Pistorius is standing trial for murdering the supermodel, but has pleaded not guilty, claiming he believed she was an intruder that entered his home in the night while he was sleeping.

Earlier he testified how he had locked his bedroom door and armed the house alarm before he and Steenkamp retired to bed. It had been a hot and humid night and they had gone to sleep with fans cooling them and the balcony sliding door open.

He woke in the early hours and Steenkamp woke and spoke to him briefly. He got up to bring two fans inside and lock the balcony door when he heard a sound in his bathroom. Believing someone had entered, he armed himself and approached the bathroom down an interleading passage on his stumps.

“As I was entering the bathroom I was quiet,” Pistorius said, adding that he expected people to come running at him any second.

He peered around the corner into the bathroom. His eyes were shifting between the window and the toilet door before the shots went off.

Deafened and with his ears ringing, he continued screaming for Steenkamp to call the police.

He walked back to the room with his pistol raised. He continued shouting for Steenkamp, still believing there were intruders in the bathroom. He lifted himself onto the bed , moved his hand backwards and didn’t feel anything. At first he thought Steenkamp was on the floor.

When he couldn’t find her, he ran his hand along the curtains to check if she was hiding. He went back up the passage, still disbelieving that he could have shot her. He tried to open the toilet door and found it locked.

He ran back and screamed from the balcony for help. He put his legs on and ran back to the bathroom and tried to kick down the door. He returned to the bedroom to fetch the cricket bat. All the while he was screaming and shouting.

“I don’t think I have ever cried and screamed like that,” he said. He cried out for Reeva, to the Lord, begging for help.

He didn’t know what to do. He placed his firearm on the carpet. Although he could not remember having switched the bathroom light on, he said he remembered that the light was on when he tried to kick the door down before fetching a cricket bat from his bedroom.

“I think I hit the door three times and I grabbed a plank and pulled it out into the bathroom,” he said. There was no key on the inside of the door. He spotted it on the floor and managed to reach in and retrieve it.

He used the key to unlock the door. Opening it, he found Steenkamp. He went in and held her, Pistorius said – breaking down in sobs as he explained that he had no idea how long he spent holding her.

Court adjourned for Pistorius to compose himself. His sister and brother went to comfort him as he wept in the witness box. He left the court room for a short while and returned briefly for Judge Thokozile Masipa to adjourn the day’s proceedings early.