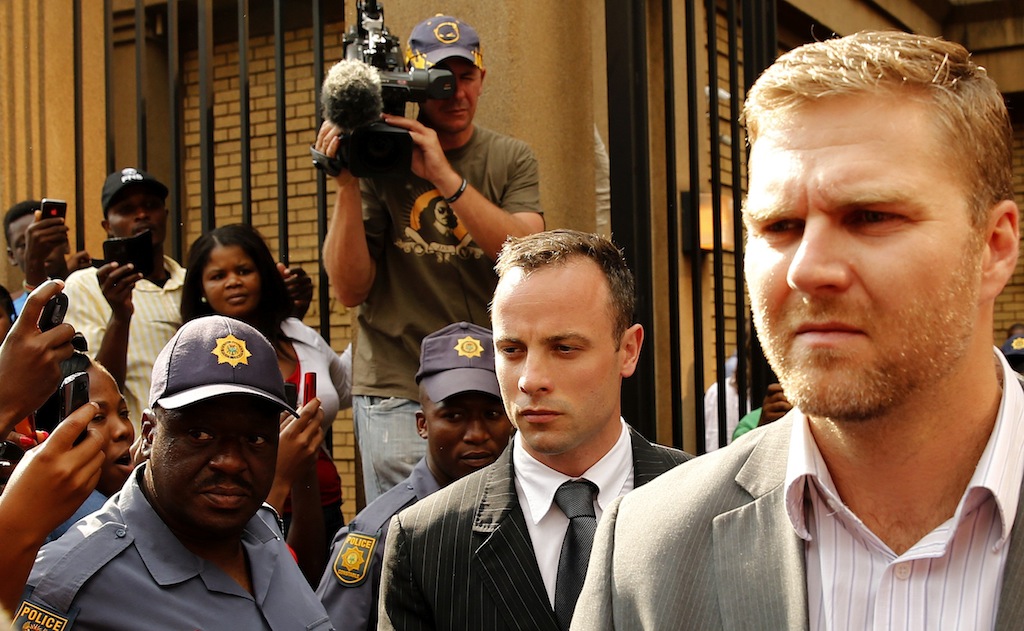 Olympic and Paralympic track star Oscar Pistorius (C) leaves at the end of his trial for the murder of his girlfriend Reeva Steenkamp, at the North Gauteng High Court in Pretoria, March 18, 2014.

PRETORIA - Is it possible that Oscar Pistorius was -- as he claims -- standing on his stumps when he fired the shots that killed his girlfriend Reeva Steenkamp?

This was the focus of much of Tuesday afternoon’s evidence in the Paralympian’s murder-trial proceedings in the North Gauteng High Court on day 12 of the trial.

Ballistics expert Chris Mangena took the witness box to tell the court how he had taken Pistorius’s claims and used them as the basis of his investigations as he went about recreating the crime scene and events that unfolded during the early hours of Valentine’s Day last year.

Pistorius has repeatedly claimed that he heard a noise in the bathroom when he got up to fetch a fan from his bedroom balcony during the early hours. Feeling vulnerable on his stumps, he claimed he fetched his gun, approached the bathroom while shouting to his girlfriend Reeva Steenkamp to call the police. He then fired four shots through the toilet door in the mistaken belief that he was targeting an intruder, only to discover he had shot Steenkamp.

Captain Mangena said he was based at the SAPS Forensics Science Laboratory and has been a qualified ballistics expert since 1998.

Mangena said he received Pistorius’s damaged toilet door on March 7 last year and began his examinations that day. He said he started by testing for gunshot residue to determine the distance from which the gun shots through the upper panels had been fired.

Mangena saw four bullet holes through the door and had marked them A, B, C and D.

The following day he took the door back to the scene where it was pieced back together, replaced on the hinges with the same screws and the scene was reconstructed. Several policemen and a private expert were present on the scene.

He measured the height of each hole: A was 93cm off the ground, B was 104.3cm high, C was 99.4cm and D was 97.3cm high. Inside the toilet cubicle he found a ricochet mark at 89cm high and an impact mark from the same bullet at 75cm. He found another mark on the tiles containing lead traces which he believed to be the impact of a piece of bullet fragment.

Mangena said he then made use of steel rods to work out the angle and trajectory of the bullets. He had not used thin rods as they would move around, but rather rods sized to fit snugly in the holes and show the angle of the rods.

He found that only one bullet had hit the wall and three others had struck a target inside the toilet. In this way he managed to link bullet hole B with the ricochet mark.

Mangena said steel rods had the danger of bending and moving out of their angles and so he had then gone on to use laser beams to determine exact angles he had originally determined with the steel rods. He had also used an angle finder instrument.

He then asked for the position of the spent cartridges on the scene.

Building on his information he further asked for Steenkamp’s post mortem photographs in order to view her injuries. He asked for the clothes she had been wearing when she was shot. He explained that this information was necessary for him to reconstruct what had happened.

Mangena had examined the entry and exit marks of a wound on Steenkamp’s arm and another on her hip. He found an impact bruise on her chest, but no bullet entry. There were also bruises on her back and a head wound with a bullet entrance at the front and an exit wound at the back. He examined her vest and found a hole in it on the right side “as well as some body tissues”.

Mangena also asked for Pistorius’s version of events. He used this as his bench mark in reconstructing the events, working from Pistorius’s claims that he had been on his stumps when he shot the toilet door.

Mangena also asked for Pistorius’s measurements -- 155cm tall on his stumps and his shoulder at 123cm and elbow at 96cm. His height with his prosthetic legs on was 1.84m and his shoulder height was 156cm. His arm length, held out straight with the hand in a grip position, was 66cm.