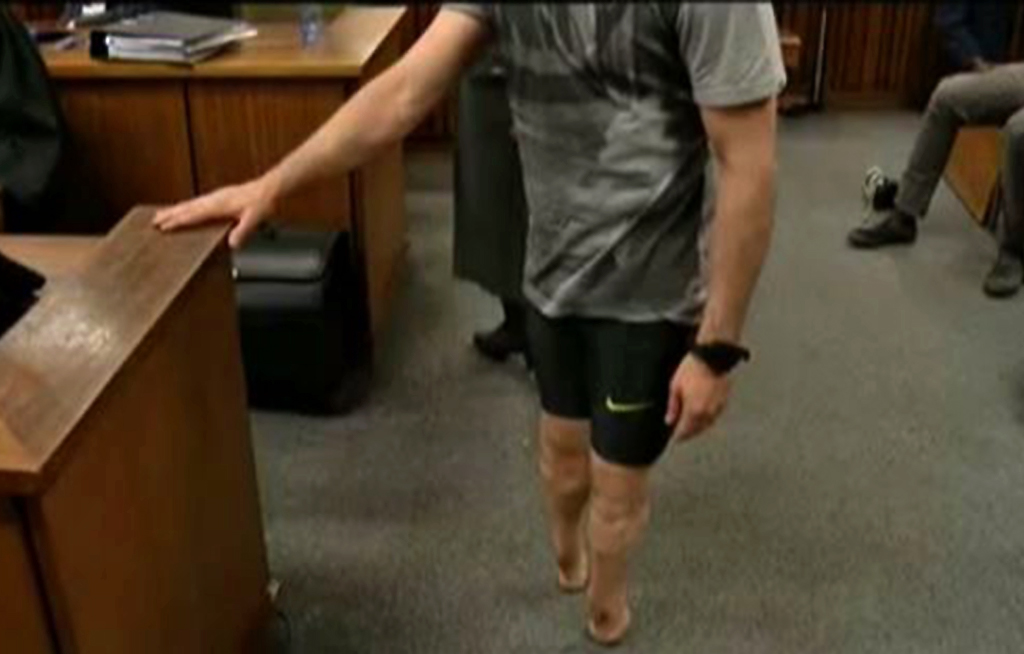 15 June 2016 - Oscar Pistorius removes his prosthetics in court on Day 3 of his sentencing hearing to demonstrate his capabilities on his stumps, while Advocate Barry Roux argues his case.

PRETORIA - Oscar Pistorius has removed his prosthetics to show the North Gauteng High Court what he looks like on his stumps.

Defence attorney Barry Roux pointed to Pistorius, saying that this is the person being sentenced.

A sobbing Pistorius walked hesitantly on his stumps.

Wearing shorts, the double-amputee removed his prosthetic limbs at the request of Roux.

The Paralympic athlete held onto wooden benches for support as he hobbled in front of the judge, and appeared in distress as a cushion was provided for him to rest on.

On the night that Reeva Steenkamp was killed, Pistorius was on his stumps.

Roux was wrapping up his closing arguments.

Roux said despite the Supreme Court of Appeal finding the former Paralympian guilty of murder, he should be given a lighter sentence.

Pistorius shot and killed his girlfriend Steenkamp on Valentine’s Day in 2013.

OscarPistorius walking on his stumps. Can hear a woman crying. pic.twitter.com/8FK4iAGKGx

OscarPistorius now walking through court on his stumps. He stares at prosecutor Gerrie Nel as he passes. Some in court in tears.

OscarPistorius he&39;s taking off his prosthetics to show how he looks in his stumps and walking to front of court..