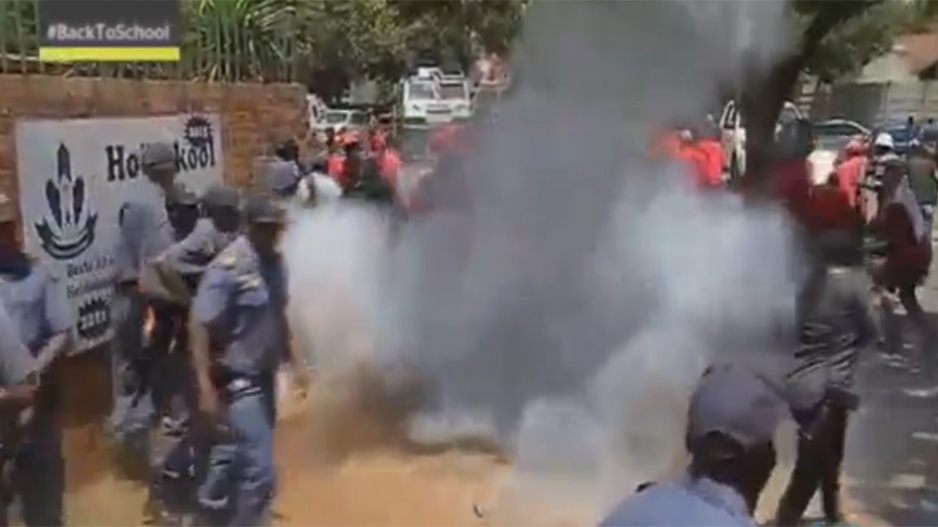 Stun grenades have been fired outside Horskool Overvaal in Vereeniging following protests by parents and political parties.

VEREENIGING - A provincial leader of the ANC in Gauteng was injured when police fired rubber bullets outside Horskool Overvaal in Vereeniging on Wednesday.

It has been confirmed that Bones Modise, provincial secretary for the Gauteng ANC, sustained a rubber bullet injury to the head and has gone for a scan at a Vereeniging hospital.

Rubber bullets were fired on more than one occasion on Wednesday.

According to Colonel Lungelo Dlamini of the SAPS, 10 people were arrested at the protest for public violence.

An additional demonstrator was arrested for possession of a firearm.

"They have been charged and will appear in court tomorrow," he says.

Pupils, however, left the school grounds in the afternoon via a different entrance than the one used by protestors, and the crowd dispersed shortly thereafter.

[ON AIR] The moment a stun grenade is fired outside HoerskoolOvervaal as scuffles and arguments break out between EFF protesters and parents. Courtesy DStv403 pic.twitter.com/TRBXGPAR7F

EFF supporters were demonstrating outside the school on Wednesday morning, while some tried to gain entry to the school.

A parent was assaulted by protesters picketing outside the Afrikaans-medium school.

The protesters say the court judgment is unfair and perpetuates segregation.

Last week, the high court ruled that the school doesn&39;t have the capacity to accommodate 55 English-speaking pupils.

Police officers and private security guards are outside the school to keep a watchful eye.

HorskoolOvervaal Private security personnel are on site at the school in Vereeniging following a court ruling on Tuesday over the school’a admissions policy. @danmoyane pic.twitter.com/xmmw4Or6WV

HorskoolOvervaal Some tension as tempers rise outside court with @EFFSouthAfrica members and some in @MYANC shirts rushed at the school gate shouting, “Racists.” @danmoyane pic.twitter.com/2SXoU2ri2z

Police @SAPoliceService have moved their vehicles closer to the school gate at HorskoolOvervaal as a group of demonstrators picket outside the school. BackToSchool @danmoyane pic.twitter.com/Oz2cpImO2K

The EFF&39;s Mohale Maseko said the school should see it as a positive sign that parents have confidence in it and the teaching system.

“Why should they deprive learner who wants to learn in a different language?" he asked.