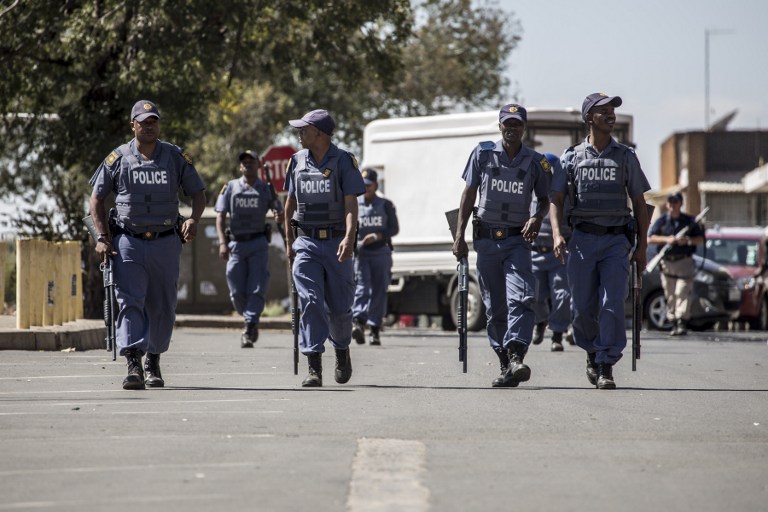 Anti-riot policemen arrive to quell a protest and raid a hostel in Benoni where local residents have been protesting against foreign-owned shops in the area.

This according to a University of Johannesburg (UJ) report released on Wednesday.

The longer UJ researchers worked on the report, the "more it became clear that senior South African Police Services [SAPS] officials and government ministers misconstrued IRIS data (IRIS is the police&39;s incident registration system) and in consequence misled Parliament and the public.

"This is significant because their interpretations were central to motivations for a massive increase in expenditure on public order policing," the report states.

The crowd incidents are broken down into “peaceful” and “unrest”. Peaceful ones made up around 90 percent of all incidents recorded, and unrest cases the remaining 10 percent.

The way “peaceful” and “unrest” were defined was primarily determined by the character of police intervention, and unrest should not be equated with violence.

In the report, three examples are cited where IRIS statistics were misused.

Another example arose from Zuma&39;s state of the nation address to Parliament on February 12 this year.

"We are a democratic state and recognise the community&39;s right to protest. We however appeal that these protests should be within the ambit of the law and must be peaceful as stated in the Constitution.

Alexander said the president moved from "protests" to "incidents" without indicating that these were different.

According to the report, while police did face violence in their jobs, the worst of this was not associated with protests. The question then was why the figures would be exaggerated.

"In our view, the answer may be found less in the violence and more in the threat to established order that generals and ministers associate with popular protest," the report states.

"The effect, and possibly the intention, of the official discourse represented above is that it stigmatises protest, an important feature of a democratic society."

The presidency did not respond to questions on the report.

National police spokesperson Lieutenant General Solomon Makgale said there was an obligation to police public events as per the National Sports and Recreation Act.

"The implications are that in general, all assemblies, gatherings, meetings and demonstrations, will be classified as crowd management [peaceful] incidents as we have to deploy officers from the public order policing unit. It is a specialist unit in crowd management," he said.

"The SAPS did not conflate &39;incidents&39; and &39;protests&39;. Any crowd management action is defined as an incident, which will either be peaceful or unrest.