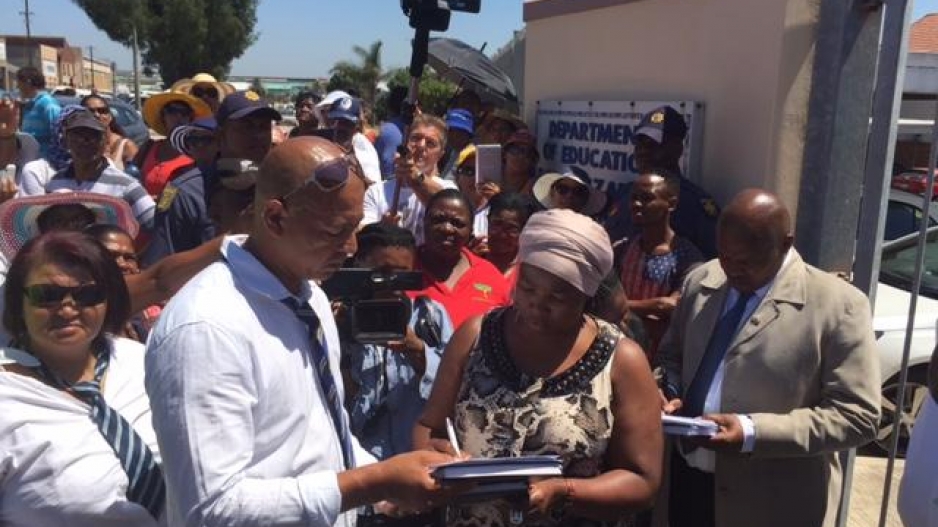 Acting Head of Department of Education in the Eastern Cape, Siza Netshicaphala receives a memorandum outside the district office.

PORT ELIZABETH - Parents from Port Elizabeth’s northern areas are not backing down and are adamant that they would continue to “fight for education” and stage protests if the Department of Education in the Eastern Cape did not meet their demands.

On Monday, a group of parents gathered outside the Department of Education district office in Port Elizabeth to for an illegal picket protest.

This is the third week in which no learning has taken place at schools in Port Elizabeth’s Northern Areas.

The gathering on Monday became unruly when angry parents attempted to enter the building premises to hand over a petition to department officials.

Officials from the Dpt of Education come outside to collect the petition signed by parents @AfriNewsAgency pic.twitter.com/StwszMgXZB

Police, who were monitoring the protest, barred parents from entering and forcefully closed the gates.

SACP in the Eastern Cape is concerned on the closure of many schools in the northern areas of Port Elizabeth. @TeachSolidarity @HighPeakNUT

“If our government can give bursaries to virgins, my eight-year-old daughter who is still a virgin, why can’t she get bursary? What do children in KwaZulu-Natal have that our children don’t?

“Our constitution says I have the right of movement. If the police here want to resist my right then I say they are violating my rights. I am doing this here for my children, my child’s future is my responsibility. These officials sit in air-conditioned cars while my child must sit and sweat in a class of 80,” said Fraser

Another parent who identified himself only as Chief Khoisan SA called upon the department to stop lying to parents.

“You are a bunch of useless people. Things are going to get worse. The whole of Nelson Mandela Bay will burn. We won’t open schools until our demands are met today [Monday].”

A grandmother from Salsoneville, Anita Koopman Smit, said parents were fighting the same battle since 2010.

“All the children in the township are flocking to the Northern Areas, and I want to stress I am not a racist, but they are flocking to the Northern Areas and overcrowding our schools. Where are those parents? We are fighting for all children, not only coloured children, but those parents they are not here. We want quality education but how can you get quality education if you have 60 children in a class?”

Marlon Daniels, regional chairman of the recently formed Nationalist Coloured Party in Nelson Mandela Bay, led the group of protesters on Monday and outlined the following demands contained in the petition:

– Learners with special educational needs to be catered for
– Section 20 schools to be changed to Section 21 schools where schools would manage its own budget
– The need for non-teaching staff such as secretaries and groundsman
– The pupil teacher ratio to be 30:1

Eastern Cape:SACP No matter what the challenges may be that should not mean that people must deny children their right to education.@eNCA

Meanwhile, the Acting Head of Department of Education in the Eastern Cape, Siza Netshicaphala, who later received the memorandum outside the district office, acknowledged angry parents and said the department had selected six districts that would be visited by the Eastern Cape Education District Executive Committee.

Parents want to enter the Dpt of Education to hand over a petition but police bar access @AfriNewsAgency pic.twitter.com/FWJVcffGb9

She told reporters that the department’s head office came to visit the Port Elizabeth office on Monday and that the five other district offices selected would also receive visits within the next three months.

“We will make sure that we address all the burning issues that have been identified by our political principals. One of the major issues that we had to deal with specifically in this district is the issue of leadership. Our head of this district has been unwell for some time, we have appointed a new district manager, Joy Grobbler to act in that position until either he is well enough to come back or if he is placed somewhere else.”

Netshicaphala added that there was a team working on the placement of teachers and that they hoped to have concrete numbers by Tuesday.

She reiterated that the Eastern Cape’s Premier Phumlo Masaulle had given a deadline to the department that teachers must be in classrooms by March 1.