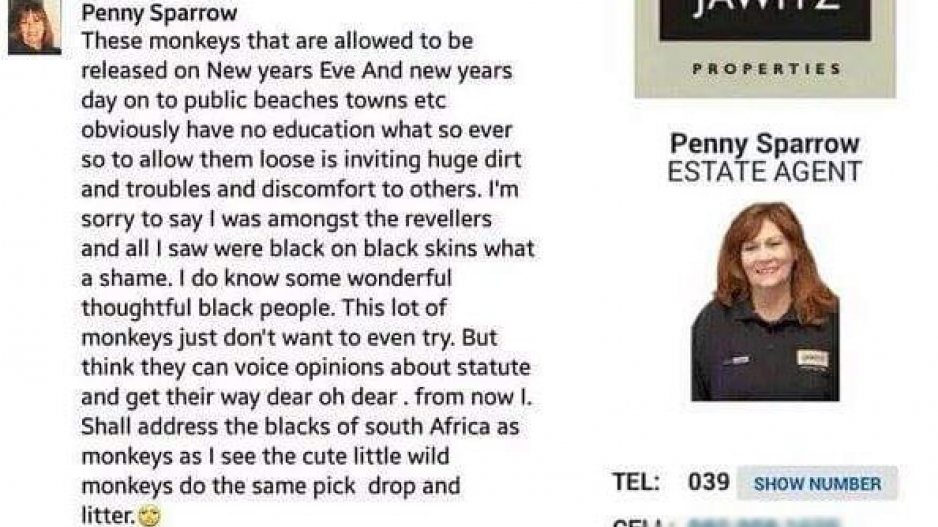 Penny Sparrow and Justin Van Vuuren separately insulted black people who were on the Durban beaches over the Christmas period.

Van Vuuren called them animals who must go back to where they came from.

In the post, Sparrow says “these monkeys that are allowed to be released on New Years Eve and new years day on to public beaches towns etc obviously have no education what so ever and to allow them loose is inviting huge dirt and discomfort to others.”

Sparrow eventually released an apology for her post, stating that the post was directed at the littered state of the beaches and not to personally insult anyone.

Penny Sparrow is a moegoe of the century. She can&39;t stand Black pple at the beach but she can stand them at her home. PennySparrowMustFall

PennySparrow, are these also monkeys on Brighton Beach in the U.K? Don&39;t let your passport cut you on the way out. pic.twitter.com/c1BtUyCJ5x

Why should she get to insult majority of SA & wake up & go to work like nothing happened. PennySparrowMustFall https://t.co/bzO45iMlE3

People like Penny Sparrow don&39;t deserve to be in this country. PennySparrowMustFall

Her former employer Jawitz has released a statement distancing itself from Sparrow and her views.

"Comments made by a an ex-employee is threatening a company that is built on integrity, morals and values. We are consulting an attorney to deal with this matter and the damage this woman has done to our company," the statement read.

"Penny Sparrow&39;s comments are appalling and degrading and this is not someone we align ourselves with."

Comments made by a an ex-employee is threatening a company that is built on integrity, morals and values. We are...

Political parties and activists have named and shamed both individuals on Twitter.

Both parties have since apologised but the Twitterati are still fuming, saying it’s not enough.

It felt like everyone in South Africa was on the beaches of Durban for New Year&39;s Day. FOMO? WATCH this!

- For more on this story, watch the video in the gallery above.