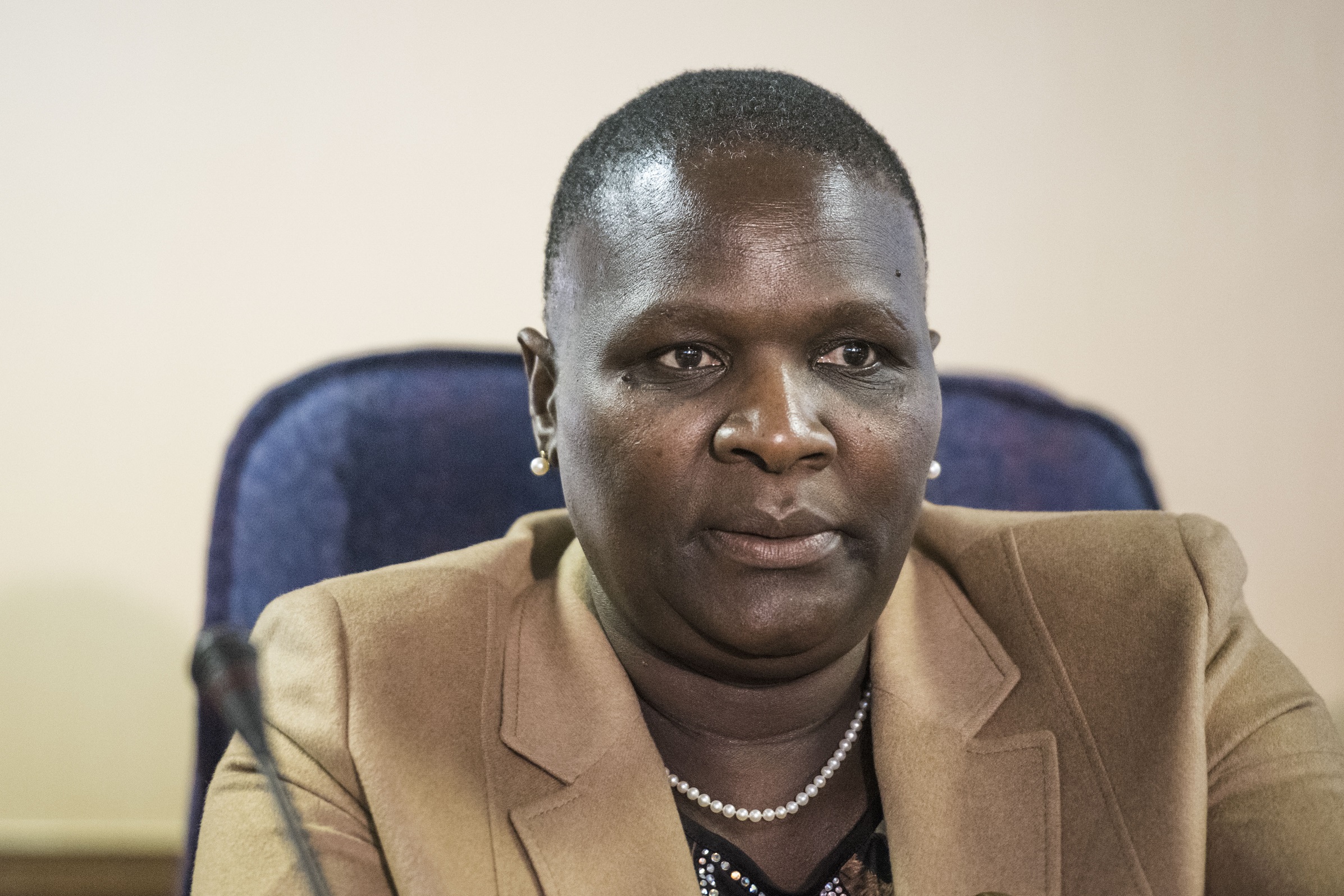 Suspended National Police Commissioner; Riah Phiyega during the Claassen Commission of Inquiry on June 01, 2016 in Pretoria.

“Any officer at that level would have known that this is a labour dispute and that because of the increasing number of the people who joined the demonstrations day after day, called for crowd control, public order policing (POP) and not the NIU (national intervention unit), not the TRT (tactical response team) and not the dog unit. That is SAPS 101,” said Advocate Dumisa Ntsebeza SC, representing families of the deceased miners at the inquiry.

“He made a number of concessions and the first of which was, when you have a crowd of that nature you just saturate the place with water cannons. You don’t bring one or two (water cannons), but you bring every arsenal of water cannons you have so that you can use the water cannons to disperse the crowd,” said Ntsebeza.

“We say a police commissioner who had received a report on the 13th (August 2012) where two police officers were killed but what never gets mentioned are the three miners who were killed. They clearly didn’t commit suicide on the 13th but they were killed by the police.”

Ntsebeza said the risk of bloodshed from attempting to disperse the protesting mineworkers was foreseeable.

“If it was foreseeable to a person like me, who has never been trained as a police officer, how much more would it have been foreseeable to a national commissioner of police who had been briefed after two of her members had died in a horrific skirmish between them and the miners? We say it was a gross error of judgement on her part to have sanctioned this move to a tactical stage on any basis,” said Ntsebeza.

Earlier, evidence leader Ismail Jamie SC told the inquiry that Phiyega must be removed from office.

“It is submitted that it has been established that the national commissioner has acted in breach of the Constitution and the law. Accordingly, she is guilty of misconduct, is unfit for office, and is unable to carry out her duties in accordance with the law,” said Jamie.

“In the circumstances, we submit that this board of inquiry should recommend that in terms of the Police Act, General Phiyega be removed from office as the national commissioner of the South African Police Service.”

Chairman of the inquiry, Judge Neels Claassen, asked Jamie whether the evidence leaders would not be proposing any lesser “relief”.

“We submit that the conduct of the national commissioner is so egregious and serious, departs so far from the standard we expect from somebody in that very high position, the only proper penalty would be removal from office. Those are our submissions,” Jamie responded, wrapping his closing arguments to the inquiry.

Jamie criticised Phiyega’s decision not to testify at the inquiry regarding incidents in Marikana in August 2012 related to violent industrial action by miners which left more than 44 people dead.

Phiyega is facing questions over her role as national police chief during the unrest on August 16, 2012 when 34 people, mostly striking mineworkers from the Lonmin mine, were shot dead in a clash with police.