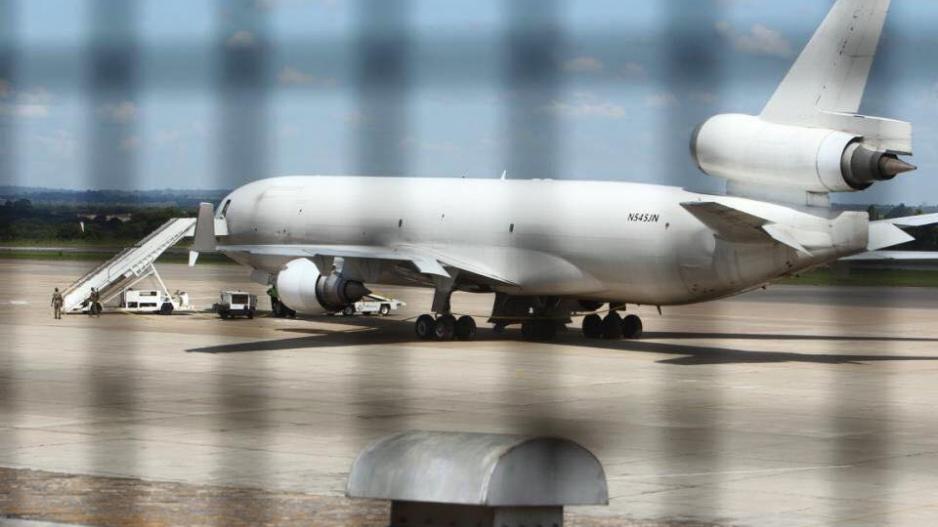 The South African Reserve Bank said the aircraft is carrying a consignment of South African banknotes that was produced overseas as part of the banks annual production plan.

HARARE – Zimbabwean authorities have finally released a cargo plane carrying 67 tons of freshly printed cash worth billions of rand, but failed to identify the corpse found in the aircraft.

The McDonnell-Douglas MD-11 trijet was impounded on February 14 during a refuelling stop after workers at Harare International Airport noticed blood dripping from the plane.

A clothed body of a black man was discovered in a compartment, but owing to advanced decomposition a forensic pathologist could not establish with certainty how and when the man died.

Ruling out foul play, police said the man had boarded the plane alive with no internal injuries. But it is not known why he would have stowed away in Munich, Germany on an Africa-bound plane.

“The body was infested with maggots. It was impossible even to retrieve fingerprints,” said the source.

Interpol has since issued a notice to police forces in Germany, Belgium, Uganda, Ivory Coast, and Nigeria to assist in establishing the identity and nationality of the suspected stowaway.

The money, printed in Munich and destined for Durban, belongs to the SA Reserve Bank.

Details of the diplomatic manoeuvres which led to an amicable resolution of the incident have since emerged.

As soon as the aircraft saga unfolded last Sunday, South African ambassador to Zimbabwe, Vusi Mavimbela, rushed to the airport but failed to intervene.

Government officials in Pretoria offered to send SANDF soldiers to guard the plane and its  “diplomatic shipment” but the proposal was rejected by the Zimbabwean authorities, sources said.

Pretoria’s anxiety would have been justified, considering that a few days prior, the Zimbabwe Broadcasting Corporation had reported on a smuggling syndicate involving soldiers, police, and immigration officers stationed at Harare Airport.

But Zimbabwean authorities insisted on a thorough investigation into the apparent murder case and wanted to scan the goods to ensure the cargo was in fact cash.

“While the Zimbabwe security has said they have found no connection between the two, they must still scan the cargo to ensure that it is only what is on the schedule of the plane,” Zimbabwe foreign affairs secretary Joey Bimha told journalists at the time.