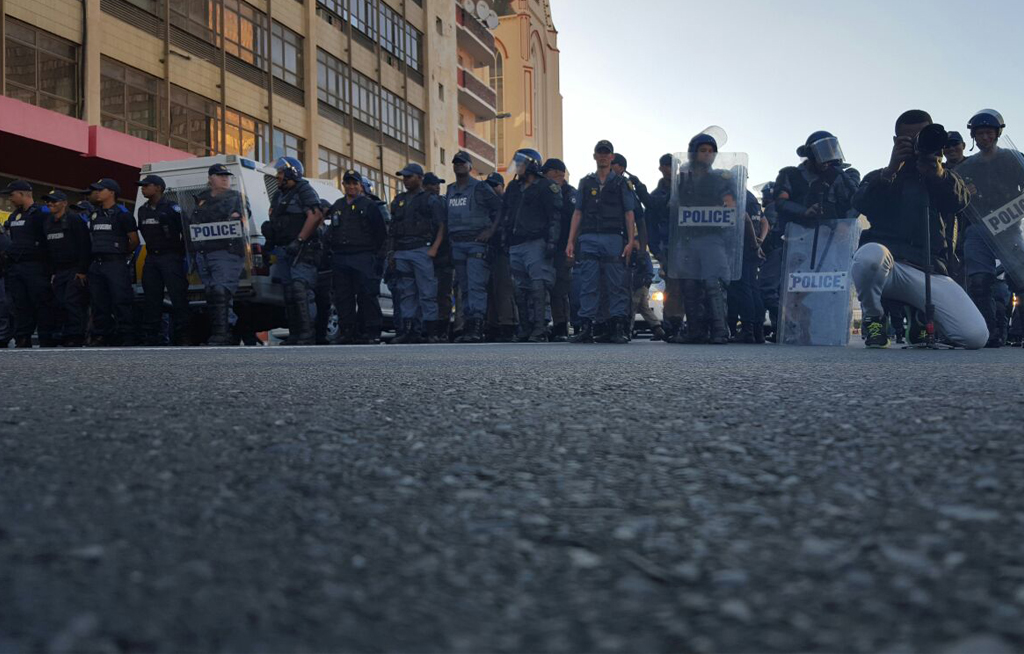 21 October 2015 - Crowd control police ready themselves ahead of the FeesMustFall protest marches by university students in Cape Town on Wednesday.

In the wake of the mass university student protests across the country on Wednesday and in particular the thousands of protesting students that clashed with police on the precinct of Parliament in Cape Town, the police have condemned the actions of the protesting students outside the National Assembly.

“The National Joint Operational and Intelligence Structure (NATJOINTS) comprising of the South African Police Service and various Government departments has been activated, as well as the Provincial JOINTS to ensure that a multi-disciplinary approach is followed with regards to protest actions taking place throughout the country,” an issued statement late on Wednesday night by the SAPS said.

“Therefore, the National Joint Operational and Intelligence Structure has directed that there be a presence of security force personnel, Public Order Police in particular to ensure that the Constitutional Rights of all are protected.

The students that have been arrested could face charges of trespassing and public violence.

“The Joints has noted that - by and large - violence has not been part and parcel of these protests. However, the manner in which some students forced their way into Parliament in Cape Town today and the alleged damaging of a motor vehicle/s nearby are a cause for concern,” the statement continued.

“The behaviour of those students is unacceptable and should not be condoned in any way.

“We are satisfied with the manner in which the situation was managed by police outside Parliament today, despite being constantly provoked by the students.

“Further criminal action against those that may have transgressed the law will be considered. Thus far 30 students have been arrested in regards to the incident outside Parliament and they are likely to face charges including Trespassing and Public Violence.

“The security force deployment around the affected tertiary institutions is informed by the need to maintain law and order and to ensure that those who are not taking part in these protests are able to go about their business without any fear of intimidation or reprisals.

“We believe that all forms of violence during these protests should be condemned. We believe that adherence to the rule of law will go a long way to avoid any potential for confrontations between the police and the students.

“The Public Order Policing members have been explicitly instructed not to use unnecessary force, as in all deployments. As they have been trained in this particular aspect of policing, the SAPS has confidence in these members’ ability to discharge their duties. In the same light we call on all stakeholders to abide by the law and use all the relevant channels to have their grievances addressed.”

The arrested students were released overnight after their interdict against police intervening in a peaceful march was postponed to 8am Thursday morning.