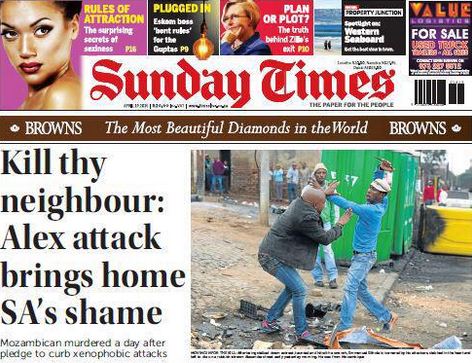 The front page of the Sunday Times showing the brutal murder of Mozambican man.

JOHANNESBURG – Police have appealed to members of the public to come forward with information relating to the brutal murder of Mozambican man.

Emmanuel Sithole was killed in Alexandra township, allegedly by a group of men.

The Sunday Times reported that the men were armed themselves with a wrench and knives.

At a press briefing for xenophobia on Sunday, Lieutenant General Elias Mawela said a team of officers were dispatched to track the suspects.

The incident was captured on camera by a Sunday Times photographer.

According to the report, they stalked Sithole, cornered him, stabbed him and left him for dead.

He was rushed to hospital but died on arrival.

Democratic Alliance shadow MEC for safety and security,Kate Lorimer  condemned the incident and called on the police to bring the perpetrators to book.

"The monsters who stalked and killed Sithole in Alexandra yesterday must be hunted down and prosecuted to the full extent of the law.

"The heart-rending photographs which show him begging for mercy and crawling along a rubbish-strewn street are the key to finding his killers," Lorimer said in statement.