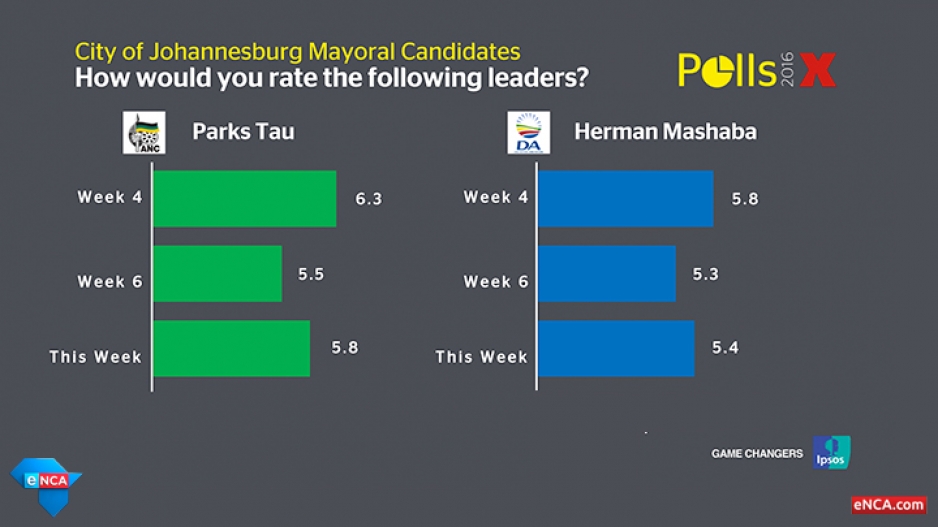 *  For your full guide to the 2016 municipal elections, click here.

JOHANNESBURG – The African National Congress (ANC) have marginally increased in support and are now only four percentage points behind the Democratic Alliance (DA) putting them in a close race to win control of the City of Johannesburg.

Support for the DA remains the same as last week with the party led by Mmusi Maimane polling at 36 percent.

The ANC is at 32 percent and support for the Economic Freedom Fighters (EFF) remains at nine percent, the same result they have achieved the last three weeks.

The number of undecided respondents decreased by one percentage point to 13 percent this week.

The margin of error in the poll results for Johannesburg is 3.9 percent.

The Inkatha Freedom Party (IFP) remains the strongest out of the smaller parties. The party led by Mangosuthu Buthelezi polled at 0.8 percent this week.

Despite the increase, the ANC’s positive sentiment rating is still lower than the DA’s.

Negative sentiment increased for the DA taking them to a 25 percent. The party’s positive party rating increased to 53 percent.

In terms of voter turnout, 89 percent of people polled in Johannesburg said they were registered to vote and 90 percent of respondents said they want to vote.