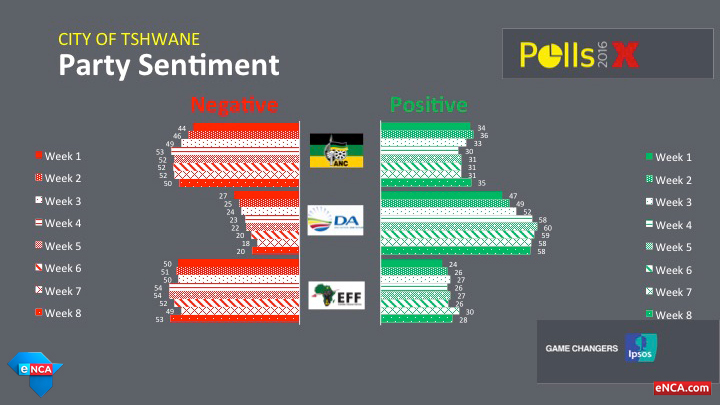 This graphic shows results from week eight of the eNCA polls on party sentiment in the City of Tshwane.

*  For your full guide to the 2016 municipal elections, click here.

JOHANNESBURG – Support for the African National Congress (ANC) has risen by three points to 26 percent the City of Tshwane.

INFOGRAPHIC: Sort through eNCA poll results for the City of Tshwane according to age, race and income demographics.

However the governing party is still behind the Democratic Alliance (DA) who polled at 41 percent in this week’s survey.

The number of undecided respondents decreased by three percentage points from 14 percent last week to down to 11 percent this week.

The margin of error in the poll results for Tshwane is 4.5 percent.

The African Christian Democratic Party (ACDP) remains the strongest out of the smaller parties. The party polled at 1.1 percent this week.

Positive sentiment increased the most for the ANC who polled at 35 percent. The party’s negative sentiment rating decreased by two points to 50 percent this week.

Despite the increase, the ANC’s positive sentiment rating is still lower than the DA’s.

In terms of voter turnout, 92 percent of people polled in Tshwane said they were registered to vote and 89 percent of respondents said they want to vote.