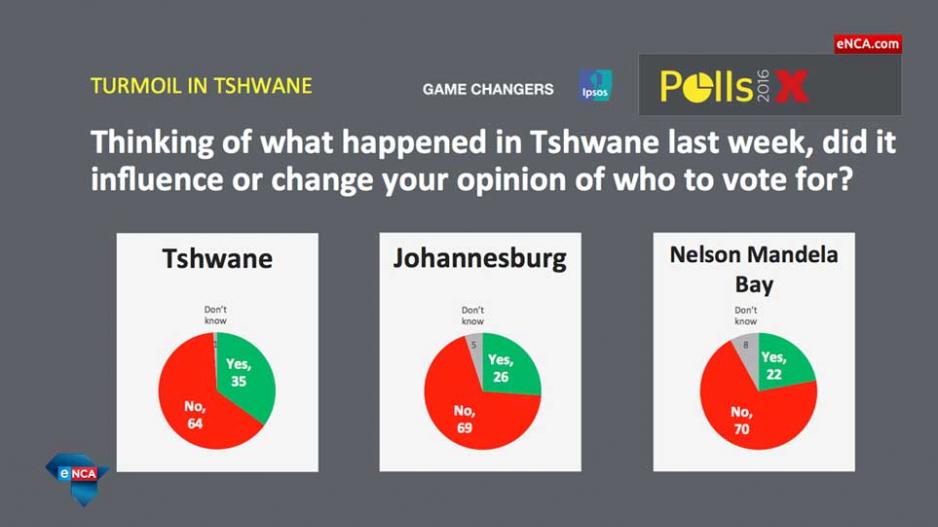 30 June 2016 - This graphic shows how many eligible voters said the recent Tshwane protests affected who they will vote for.

JOHANNESBURG - Nearly a third of people interviewed in this week’s eNCA poll say the recent violence in Tshwane, affected who they’re likely to vote for.

Most significantly, the DA is now ahead of the ANC in Tshwane by 19 percentage points.

The African National Congress (ANC) saw a drop in support of 4 percent points in the capital, but remained stable in Nelson Mandela Bay.

In the three key cities – City of Tshwane, City of Johannesburg and Nelson Mandela Bay - support for the Democratic Alliance (DA) increased by between 1 and 6 percentage points.

The Economic Freedom Fighters (EFF) lost 2 percentage points in Nelson Mandela Bay, but gained the equivalent in both Tshwane and Johannesburg.

In Johannesburg, all three of the main opposition parties gained in positive sentiment by between 1 and 3 percentage points.

*Important points to consider about this poll:

The poll is conducted by leading political polling company, Ipsos, and is based on just over 1400 cellphone respondents across the three cities. Polling is conducted on a Monday and Tuesday.