POLLS: EFF on the rise in Tshwane 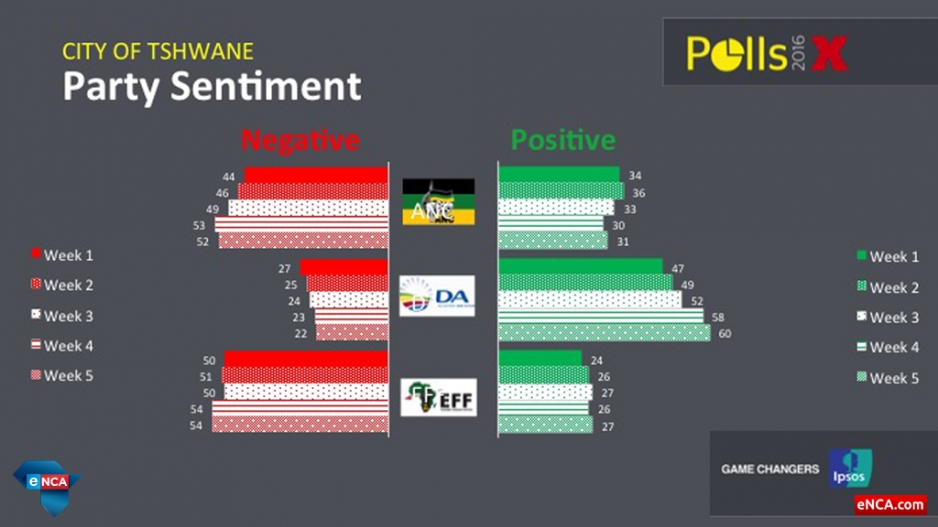 07 July 2016 - This graphic shows results from week five of the Ipsos-eNCA poll on party sentiment in the City of Tshwane.

JOHANNESBURG - The African National Congress (ANC) has slightly increased its support in the City of Tshwane by three percentage points to 26 percent.

Click here to filter eNCA poll results in Tshwane according to age, race and income demographics.

The Economic Freedom Fighters also increased its support by one percentage point to 12 percent.

However, it is the Democratic Alliance (DA) that remains the frontrunner with 39 percent of support, although they have lost three percentage points from last week&39;s results.

The ANC&39;s good gains have also extended to positive party sentiment, where they increased by one percentage point to 31 percent.

The EFF also increased in positive sentiment to 27 percent and remained the same on negative party sentiment.

Mmusi Maimane&39;s DA came out top as the best party to deal with service delivery and social challenges.

The ANC was only rated higher than the DA in one category in Tshwane for being the best party to organise youth entertainment.

The EFF also scored high in this category.