POLLS: ANC leads by a small margin in Johannesburg 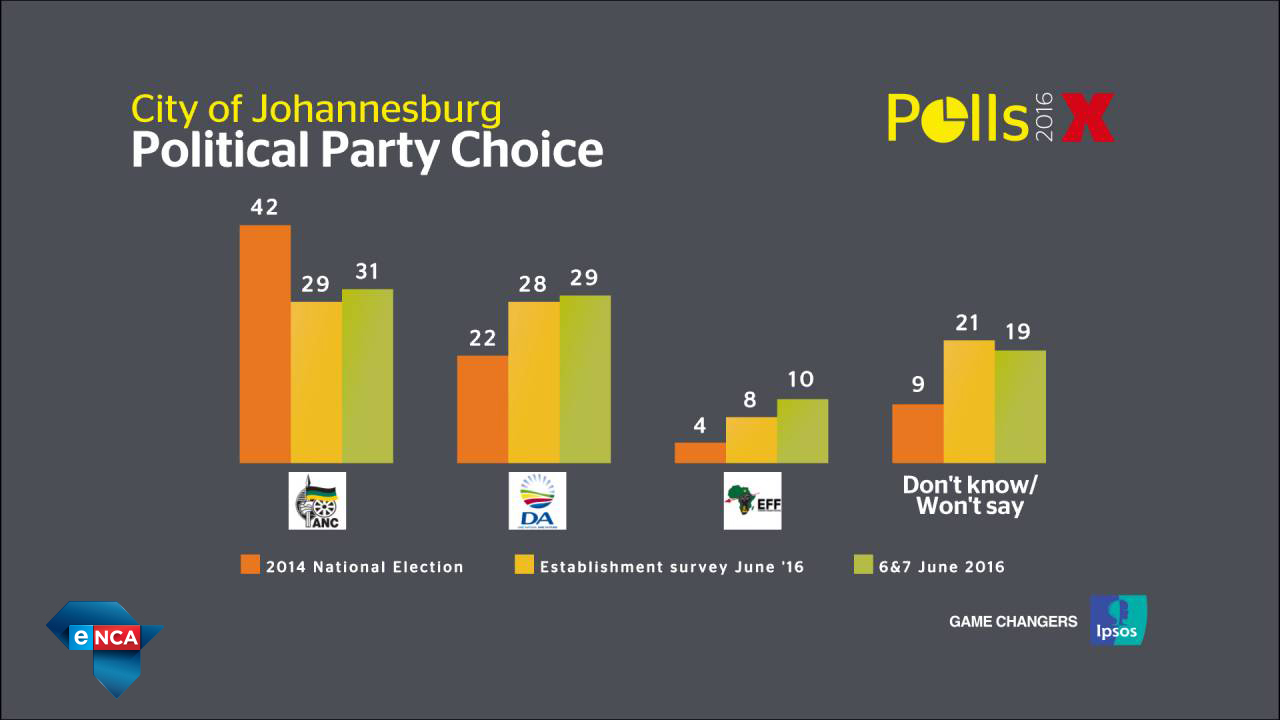 In Johannesburg, a large group of respondents say they are still undecided about who they will vote for in the upcoming elections.

JOHANNESBURG – The African National Congress could lose control of South Africa’s largest metropolitan municipality, the city of Johannesburg in the upcoming municipal elections.

The first eNCA/Ipsos poll results show that the number of people who say they will vote for the ANC in the upcoming municipal elections has decreased dramatically from the 2014 national general elections.

In the poll, conducted on 6 and 7 June, 42 percent of respondents indicated they voted for the ANC in the 2014 national elections but only 31 percent said they would vote for the party in the upcoming elections, indicating a large drop in support.

The Democratic Alliance and the Economic Freedom Fighters both showed an increase in support with 29 percent saying they will vote for the DA and 10 percent for the EFF.

The outcome could still change, as nine percent of respondents refused to answer while 10 percent said they were still undecided as to which party to vote for.

Ipsos researchers say there is 1.2 – 2.8 percentage point margin of error in the results.

In the City of Johannesburg the reason most people chose for voting in favor of the ANC was, “This is the only party for me/I believe in my party.”

A similar trend appeared in poll results for Tshwane and Nelson Mandela Bay where respondents also selected this option as their main reason to vote for the ANC.

The main reason selected to vote for Mmusi Maimane’s party was, "This party can make a difference to my life/I believe their promises."

This was also the main reason people chose to vote for the EFF, but respondents also chose “This is the only party for me” and “They will create jobs” as a reason for voting for the party led by Julius Malema.

The second highest selection for voting for the EFF was the reason, “ This party is radical/I want radical change.”

The DA scored highest, followed by the ANC, when respondents were asked about their positive sentiment towards the party.

Parties that scored highest for negative sentiment in Johannesburg were EFF, the Congress of the People, the Inkatha Freedom Party and the United Democratic Movement.

In Johannesburg the survey group included equal amounts of men and women, most of whom were in the 35 – 49 age group, the majority of whom have a matric and are working.

Click on the links below to read more about the poll results in the Nelson Mandela Bay metro and Tshwane: