POLLS: DA ahead in three cities 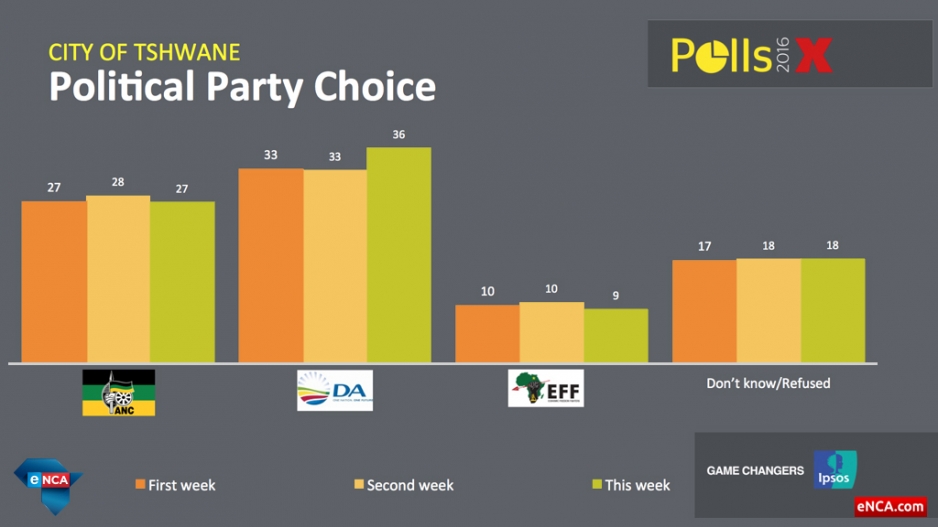 This graphic shows results from week three of the eNCA poll on political party choice in the city of Tshwane.

JOHANNESBURG - The latest Ipsos-eNCA poll*, shows that the Democratic Alliance (DA) has moved ahead of the African National Congress (ANC) in the Tshwane, Johannesburg and Nelson Mandela Bay metros.

In Johannesburg, 32 percent of voters said they will choose the DA, and 31 percent chose the ANC.

The EFF polled 9 percent in all three cities.

The results showed that no party is likely to take a majority in the August 3rd polls, ushering in a new era of coalition governments in three major cities.

What impact did the unrest in Tshwane have?

This week&39;s survey took place on Monday and Tuesday, so the impact of the Tshwane unrest isn’t immediately clear. Results next week, may reflect the anti-Thoko Didiza protests.

Who are South Africa&39;s most popular leaders?

This week, Ipsos also asked respondents to rate prominent South African leaders out of ten. The leaders selected are not all political leaders but also high profile South Africans in positions of leadership

Leaders who scored the lowest across all three metros were President Jacob Zuma and EFF leader Julius Malema.

With all eligible voters Trollip scored 6.3 out of 10 whereas with DA supporters specificially Msimanga scored the highest with 7.2 out of 10.

*Important points to consider about this poll:

The poll is conducted by the leading political pollsters, Ipsos, and is based on 1509 cellphone respondents across the three cities. Polling was done on Monday and Tuesday, so it is not clear what impact this week’s violence in Tshwane had on  the count – though this will be explicitly addressed in next week’s poll.

The poll will be conducted weekly until 3 August, voting day for the upcoming municipal elections.

The poll is conducted by leading political polling company, Ipsos and is based on just over 1500 cellphone respondents across the three cities. Polling is conducted on a Monday and Tuesday.