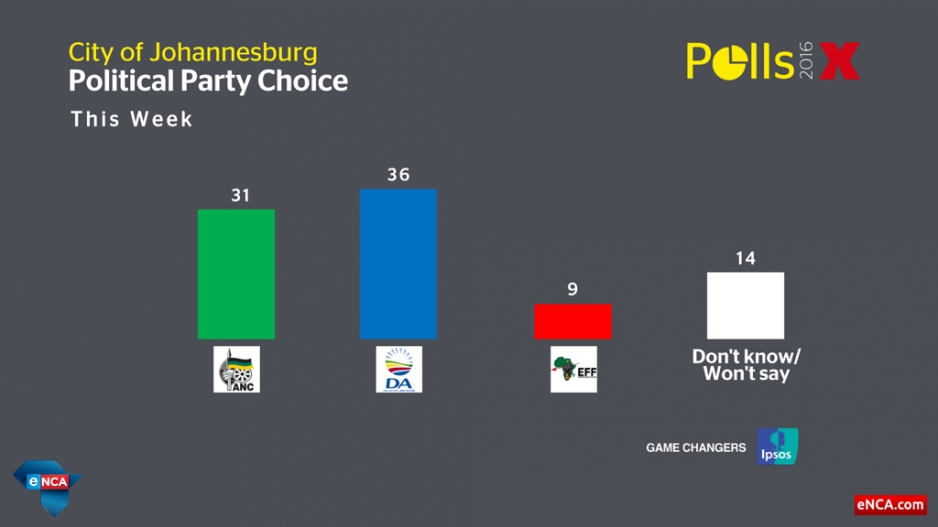 This graphic shows results from week seven of the eNCA poll question for political party in the City of Johannesburg.

JOHANNESBURG – The Democratic Alliance (DA) has increased its support by one point to 36 percent, putting them five points ahead of the African National Congress (ANC), who remain at 31 percent.

INFOGRAPHIC: Sort through eNCA poll results for the City of Johannesburg according to age, race and income demographics.

Support for the Economic Freedom Fighters (EFF) has remained unchanged at 9 percent this week.

Smaller parties in all three metros are losing support, but the Inkatha Freedom Party (IFP) is the most popular of these small parties in Johannesburg, polling at 1 percent this week.

Negative party sentiment increased by 1 percentage point for all three parties, with the EFF polling the highest negative sentiment at 45 percent.

Positive party sentiment for the EFF and the ANC remained unchanged this week compared to last week.

In the City of Johannesburg 48 percent of respondents said they knew who their ward councilor was, but only 27 percent said they had personally met them.

A total of 2,500 panel members were recruited to be polled, and every week 1,500 of them are contacted for a 5-minute telephonic interview. The results are representative of the opinions in each metropolitan area and are weighted and projected to reflect the views of the eligible voters in each area.