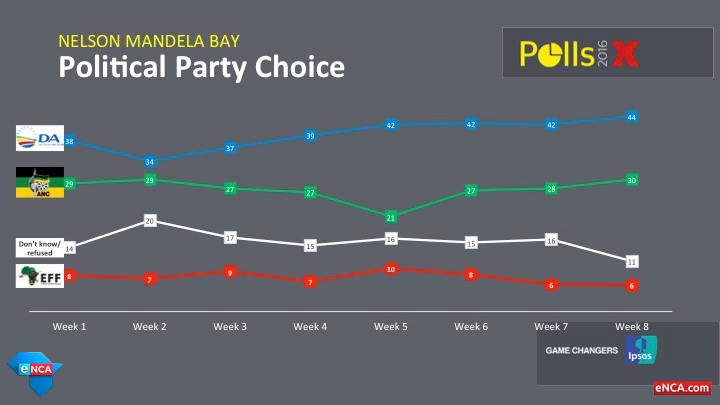 This graphic shows results from week eight of the eNCA polls on political party choice in Nelson Mandela Bay.

JOHANNESBURG – The Democratic Alliance (DA) is ahead of the African National Congress (ANC) by 14 percentage points in Nelson Mandela Bay.

This week 44 percent of survey respondents said they would vote for the DA, an increase of two percentage points from last week.

The ANC increased in support by two points but still lags way behind the DA.

Results for the Economic Freedom Fighters (EFF) remain the same as last week at six percent.

The number of undecided respondents decreased by five percentage points from last week at 16 percent to 11 percent this week.

The margin of error in the poll results for Nelson Mandela Bay is 6.7 percent.

The United Democratic Movement (UDM) remains the strongest party out of the smaller votes. Their support increased to 2.5 percent this week.

Negative sentiment increased only for the ANC, taking them to a 50 percent result for negative party sentiment. The party’s positive party rating remains the same as last week at 32 percent.

Positive sentiment increased for the DA to 60 percent while their negative sentiment decreased by one point to 18 percent this week.

In terms of voter turnout, 89 percent of people polled in Nelson Mandela Bay said they were registered to vote and 91 percent of respondents said they want to vote.