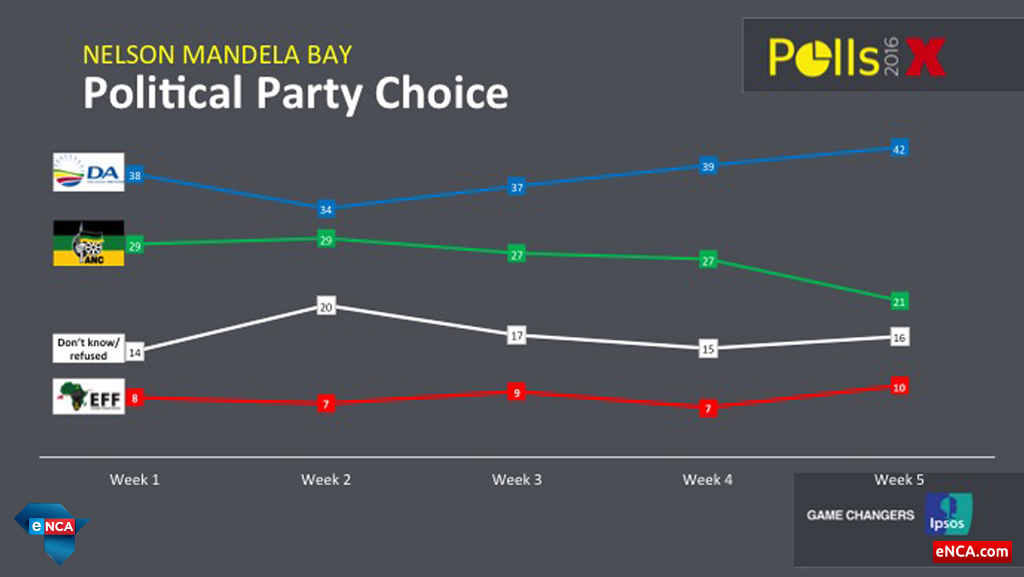 07 July 2016 - This graphic shows results from week five of the Ipsos-eNCA poll on party choice in Nelson Mandela Bay.

JOHANNESBURG – The African National Congress is declining in popularity in Nelson Mandela Bay in the Eastern Cape.

ANC support in this metro has dropped six percentage points from 27 percent last week to only 21 percent this week.

The Democratic Alliance (DA) is now more than 20 percentage points ahead of the ANC in Nelson Mandela Bay.

The Economic Freedom Fighters (EFF) have also made some gains.

In this week&39;s poll, the DA, with Athol Trollip as the mayoral candidate, gained three percentage points increasing to 42 percent.

The EFF made the same inroads also gaining three percentage points with 10 percent of respondents saying they will vote for the party led by Julius Malema.

More bad news for the governing party as negative party sentiment has increased.

Positive party sentiment for the EFF increased by seven percentage points to 36 percent.

On services in the metro, the DA came out tops as the best party to deal with issues such as refuse(s) removal, electricity, housing and water quality.

The DA was also rated much higher as being the best to deal with social issues like drug abuse and nation(al) building.

The EFF scored highly in being the best party to organise youth entertainment and to deal with racism.