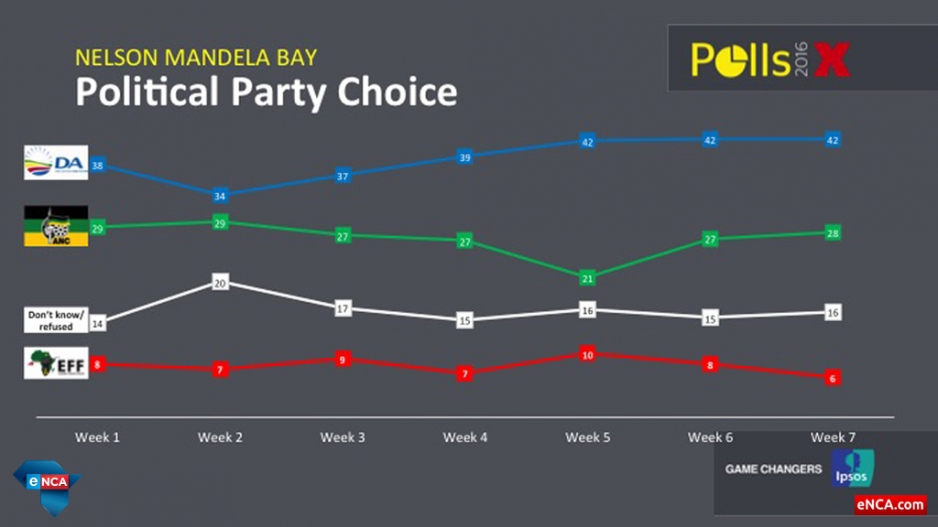 21 July 2016 - This graphic shows how support for the main political parties has changed week-on-week in the Nelson Mandela Bay.

JOHANNESBURG – Support for the EFF has dropped in Nelson Mandela Bay, according to the latest eNCA poll.

Support for the Economic Freedom Fighters (EFF) in Nelson Mandela Bay has dropped by two percentage points to six percent while the Democratic Alliance (DA) holds on to its lead with 42 percent of respondents saying they plan to vote for the party led by Mmusi Maimane.

The African National Congress gained one percentage point, bringing them to 28 percent.

The respondents who said they were undecided grew by one point, polling at 16 percent his week.

Smaller parties in all three metros are losing support, but the United Democratic Party led by Bantu Holomisa hold 1.2 percent of voter support in this metro.

Negative party sentiment grew the most for the EFF, which polled at 47 percent this week.

Positive party sentiment did not increase for any of the three major political parties contesting the upcoming elections, with the ANC and DA both dropping three percentage points in their positive sentiment rating.

This was the highest result compared to the cities of Johannesburg and Tshwane.