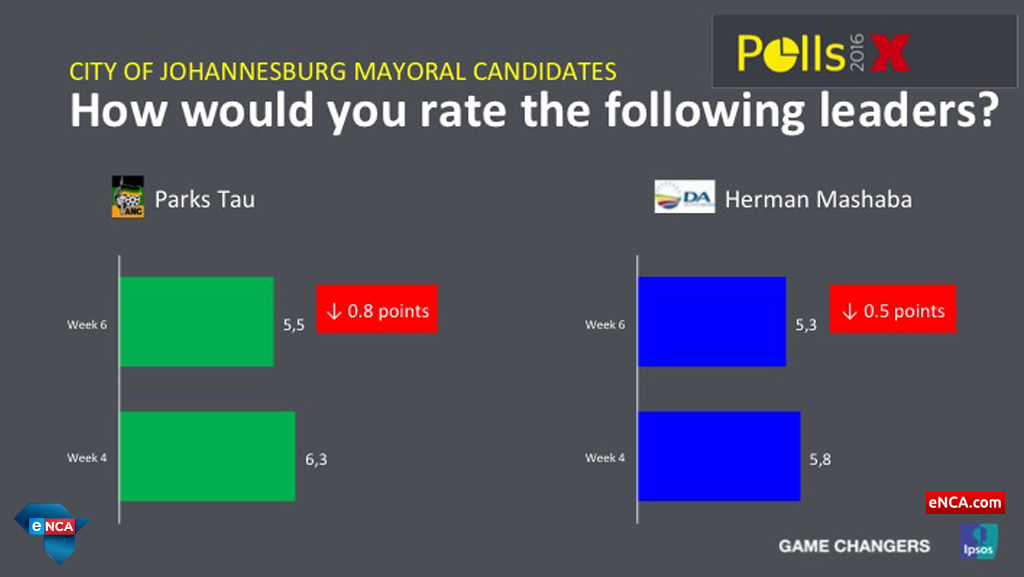 14 July 2016 - This graphic shows mayoral candidate ratings from week six of the eNCA poll for Johannesburg.

Tau is the African National Congress&39;s (ANC) mayoral candidate for Johannesburg and received a leadership rating of 5.5 out of 10. This was a decrease in his rating of 0.8 points compared to results from two weeks ago.

INFOGRAPHIC: Sort through eNCA poll results for the City of Johannesburg according to age, race and income demographics.

Earlier today I was with the youth of Soweto listening to their concerns. I am inspired by their ambition and determination for the future.

Mashaba&39;s leadership rating decreased by 0.5 points compared to results from two weeks ago. This week the entrepreneur also spent time campaigning in Soweto, but focused on the issue of improving housing and services in informal settlements.

Support for the different political parties remains consistent with results from last week.

The ANC is still ahead of the DA with 35 percent of respondents saying they will vote for the governing party.

Like last week’s results, Johannesburg is the only place where the ANC is ahead of the DA in the eNCA poll. In the City of Tshwane and Nelson Mandela Bay the DA is leading.

Support for the DA remained the same at 31 percent.

The number of respondents who said they don&39;t know who they will vote for or who refused to answer remains the same as last week at 16 percent.

Support for the Economic Freedom Fighters (EFF) dropped by one point, to nine percent, compared to last week&39;s results.

Positive party sentiment decreased for the DA by three points to 50 percent keeping them ahead of the ANC and the EFF in this category.

The EFF had a good week with a one-point increase in positive sentiment putting them at 27 percent.

Negative sentiment for the party led by Julius Malema decreased by three points to 44 percent. However they are still the party with the highest negative rating in the city of Johannesburg.

Week six also includes results of smaller parties, showing none of them making much impact.