POLLS: Smaller parties losing out to the ANC, DA and EFF 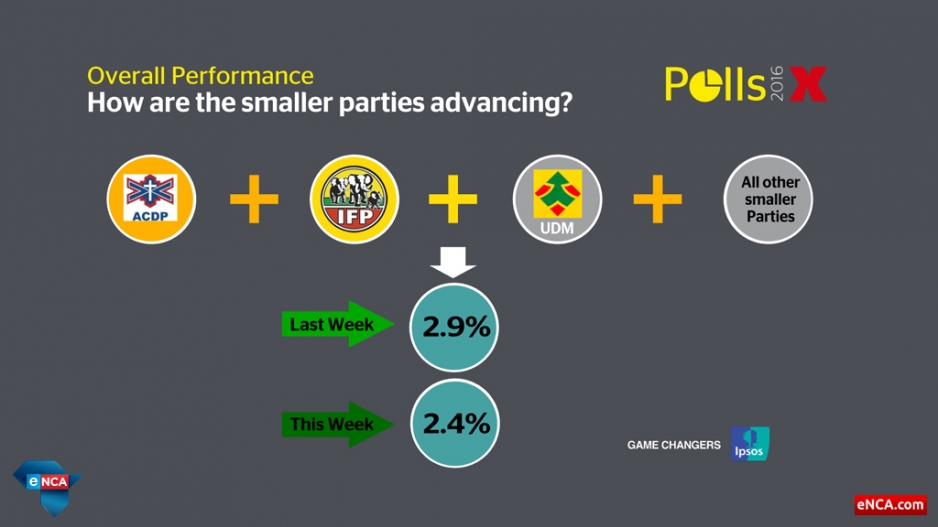 21 July 2016 - In week seven of the eNCA polls, one percent of people questioned, said they would vote for the smaller parties.

JOHANNESBURG - This week’s eNCA poll shows the smaller parties losing ground as voters shift from them to the three biggest players: the African National Congress (ANC), the Democratic Alliance (DA) and the Economic Freedom Fighters (EFF).

This trend has affected Congress of the People (Cope), the Inkatha Freedom Party (IFP), the United Democratic Movement (UDM) and the African Christian Democratic Party (ACDP), among others. Together all these smaller parties only make up an average of 2.4 percent, which has decreased in recent weeks from about 2.9 percent.

The polls show the DA holding its lead in all three of the most-contested cities ahead of the 3 August local government vote.

Click below to filter eNCA poll results according to age, race and income demographics in the three metros:

The party remains strongly ahead of the ANC in Tshwane and Nelson Mandela Bay, while in Johannesburg the two parties are still running neck and neck.

Even with 14 percent undecided, the DA’s strong lead makes it likely to emerge the biggest party in the city. However it is the EFF, which held steady at 13 percent, which holds the balance of power and will probably determine who is mayor.

In Nelson Mandela Bay, the DA remained at 42 percent while ANC support shifted slightly from 27 to 28 percent.

The 16 percent undecided voters seem insufficient to swing things the ANC way. If the DA does not get a majority, then the EFF, which is at 6 percent in this city, will again hold the casting vote for control.

In Johannesburg there’s only 5 percentage points between the DA (36 percent) and the ANC (unchanged at 31 percent) and neither are likely to get a majority.

This leaves things in the hands of the respondents who say they are undecided (14 percent) and the EFF, who remain at 9 percent