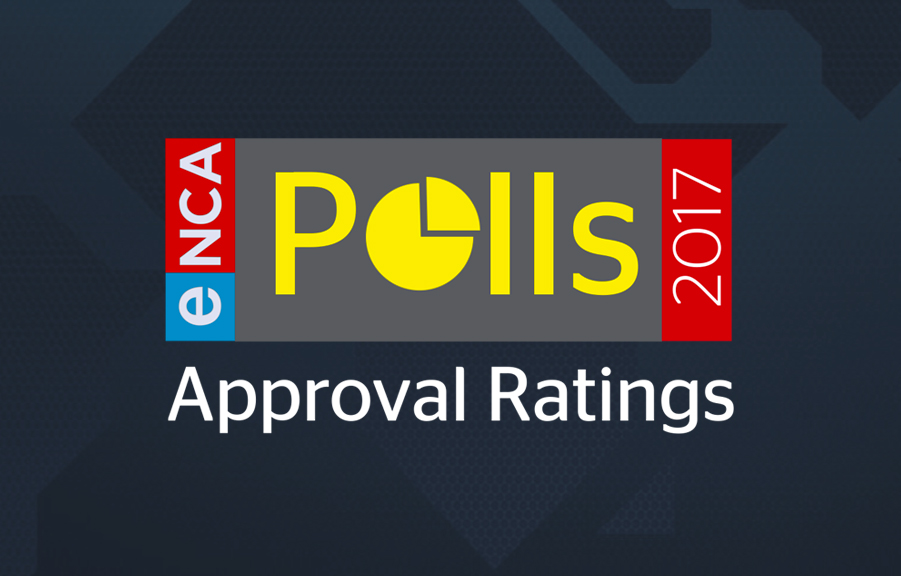 eNCA has launched the Ipsos Approval Ratings poll, to give South Africans a taste of what ordinary citizens think about the country's political leaders.

Only Malema was rated lower.

The researchers noted: “We can see that the rating for President Zuma is now remarkably lower than just after the start of his second term in office: it moved steadily downwards from 5,7 to 4.

“Just before the local government elections in August 2016, the president succeeded in winning back some appeal to voters, probably due to his higher visibility during the election campaign. However, during the last measurement his rating slumped again to 4 out of 10.”

The DA leader has shown consistent improvement, increasing his ratings last year from 4,3 in May to 4,6 by November, while his EFF counterpart’s support peaked at 3,5 but stabilising over the past six months at 3,2.

“Pravin Gordhan is positively viewed as a leader and his rating is on the same level as that of the deputy president (at 5,2).”

EFF and DA supporters were found to have very high regard for their own party leaders, who gave them 7,6 and 7 respectively.

Ramaphosa received the highest approval rating from his own party’s supporters (5,9), while Zuma and Gordhan were both rated 5,4.

Unemployment has topped the list of major issues in the country since 1994. This study found Zuma’s approval rating significantly lower among working people (3,7) than among those not working (4,1), working part-time (4,2) or unemployed (4,3).

Unsurprisingly, most of the president’s support comes from villages and rural areas: 4,5 and 4,9 respectively. He is also rated slightly better in cities (3,8) than metros (3,5).

Zuma also enjoys most support from his home province, KwaZulu-Natal: “However, in only three of the nine provinces is his rating higher than the national average of 4.0 out of 10. Thinking about the perceived strong influence of the so-called “Premier League” it is perhaps surprising that the approval rating for the president is so low in the Free State and in North West,” the researchers say.

Gordhan, though, is viewed favourably across the board: full-time-employed respondents rated him 5.4; part-time at 5.1; not working 5.5 and unemployed 4.9.

“As the minister of finance, it is relevant to have a look at how different employment status groups view Pravin Gordhan. It is interesting that in all cases the minister’s approval rating is higher than that of the president among the same group.  Surprisingly, even unemployed South Africans rate Minister Gordhan (4.9) higher than they rate the president (4.3),” the researchers conclude.

During 2016 Ipsos South Africa conducted three large-scale Khayabus studies. The third Khayabus, conducted from 25 October to 28 November 2016 involved a total of 3,416 South Africans, 18 years and older. Randomly selected respondents were interviewed face-to-face in their homes and home languages. Interviews were conducted all over the country, from metropolitan areas to deep rural areas.This methodology ensured that the results are representative of the views of the universe and that findings can be weighted and projected to the universe – i.e. South Africans 18 years and older.

Trained quantitative fieldworkers from all population groups were responsible for the interviewing and CAPI (Computer-Assisted Personal Interviewing) was used. All results were collated and analysed in an aggregate format to protect the identity and confidentiality of respondents.

All sample surveys are subject to a margin of error, determined by sample size, sampling methodology and response rate. The sample error for the sample as a whole at a 95% confidence level is a maximum of 1.63%.