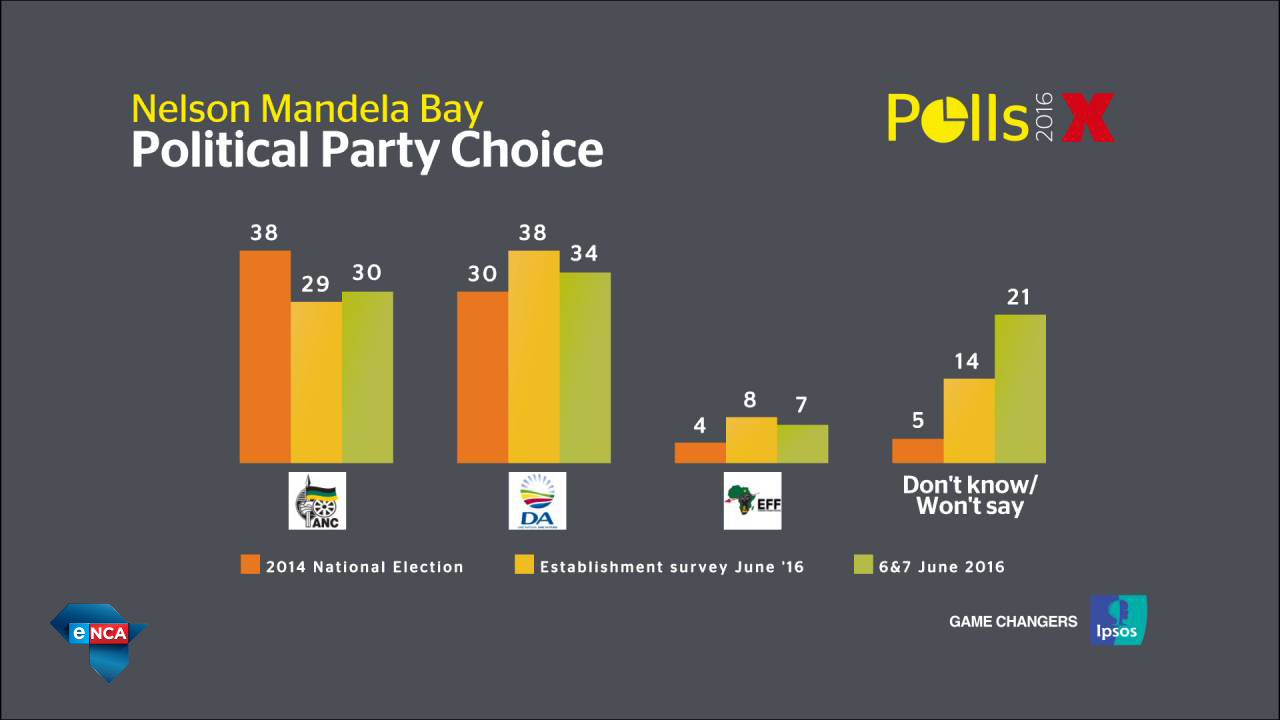 In Nelson Mandela Bay, a large group of respondents say they are still undecided about who they will vote for in the upcoming elections.

JOHANNESBURG – Nelson Mandela Bay, a historical stronghold of the African National Congress (ANC), faces being lost to the Democratic Alliance (DA) in the upcoming local elections, according to the first series of eNCA/Ipsos polls.

The number of respondents surveyed who voted for the ANC in the 2014 national elections and who say they will vote for this party again in 2016, has decreased compared to the DA, which has increased.

While the ANC’s numbers are low, the party could still win the municipality as 21 percent of respondents said they either didn&39;t know or refused to say who they would vote for.

Ipsos researchers say there is also a 2.5 – 5.7 percentage point margin of error in the results.

Many of those polled in Nelson Mandela Bay said they were voting for the ANC because, "This is the only party for me/I believe in this party."

A similar trend appeared in poll results for Johannesburg and Tshwane where respondents also selected this option as their main reason to vote for the ANC.

The main reason selected as a reason to vote for the DA was, "This party can make a difference to my live/I believe their promises."

The Economic Freedom Fighters remain a small player with only seven percent of respondents choosing to vote for the party, led by former ANC youth league president Julius Malema.

Party sentiment results for the municipality showed the DA scoring the highest, with 50 percent of respondents feeling most positive about Mmusi Maimane’s party. Forty three percent of people said they felt negative about the ANC.

The survey group for Nelson Mandela Bay included more women. Most people were between the ages of 35 – 49, are unemployed but do have a matric.

Click on the links below to read more about the poll results in Johannesburg and Tshwane.