Post Office may not qualify to distribute social security grants 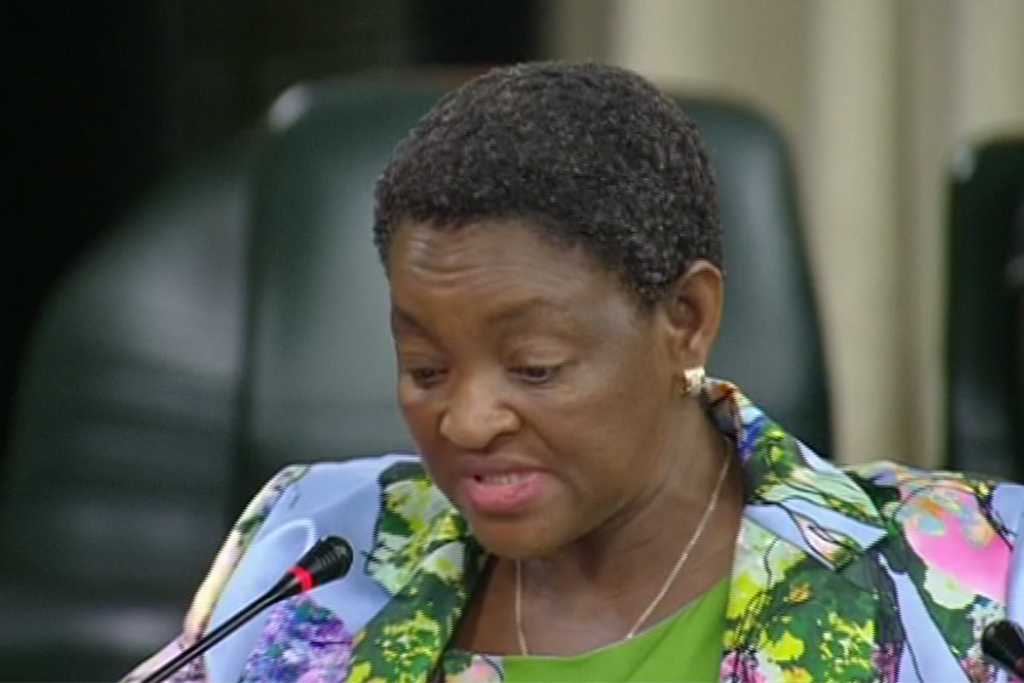 MPs were outraged when Social Development Minister Bathabile Dlamini tried to leave the Scopa meeting in parliament on Tuesday without taking any questions.?

PARLIAMENT – MPs have given National Treasury a week from Wednesday night, to evaluate the capability of the South African Post Office (Sapo) to take over the payment of welfare grants in the country.

Parliament’s standing committee on public accounts (Scopa) and its portfolio committee on social development were not happy, insisting National Treasury intervene. After the treasury evaluation, it would be taken to an inter-ministerial committee (IMC) for approval.

“I would move that by Wednesday we should convene and I would urge that we need to have the two ministers representing the departments [social development and postal services]… to clarify decisions taken.”

Sassa agreed it would put a tender to provide three of four functions required to administer grants, scheduled for this Friday, November 3, on ice.

MPs from across the political spectrum expressed their deep concern that the delay in the taking over of grant payments from Cash Paymaster Services, whose contract with Sassa to provide grants was ruled invalid by the Constitutional Court in 2014, by April 1 next year, could affect millions of social grant beneficiaries in South Africa.

The African National Congress’ Ezekiel Kekana remarked: “People are just prepared to hold the country at ransom over a small issue that we could have long resolved.”

Other MPs said while they don’t agree with playing the blame game, the country has no time to waste.

The Inkatha Freedom Party’s Mkhuleko Hlengwa believed the delay by Sassa to award the contract to Sapo was “strategic” and “purposeful”, adding that MPs were not taking the side of the post office.

Earlier during the joint meeting of the committees, Mohajane said he facilitated four meetings between Sassa and Sapo officials between Tuesday and Wednesday to try and break the deadlock.

“It is unfortunate that the two parties in terms of trying to resolve this…have not found each other in terms of agreeing on the role that Sapo should play in the grants administration,” Mohajane said.

It emerged that Sassa had not provided reasons to Sapo why the latter seemingly did not qualify to distribute over 17 million social security grants. That information has now been given to Sapo.

Mohajane also confirmed that technical teams from both sides have not met to discuss. This too, would also now happen.

“We will from our side, bring out partners in the reserve bank, bring partners in Treasury who understand banking systems to form a committee that basically will ensure that strict deadlines are adhered to…,” said Mohajane.

In addition, Mohajane said they discovered that at political level there was no proper guidance to both parties from responsible cabinet ministers.

“This process up to now lacks a firm guidance that is needed from the IMC [inter-ministerial committee], that the two ministers should facilitate that at least from high political directive is given to actually move on the same page because currently that is not happening.”

Dlmini said the post office could not print the required 4.2 million beneficiary cards per annum that were required, or vouch for a sub-contractor who could do so. Barnes said this was simply not true.

The Post Bank, an autonomous division of the Post Office, was the 7th biggest bank in South Africa and was more than capable of doing payments, he contended.

“All our counters are considered ATMs and beneficiaries can withdraw funds as well. We do not need to register as a merchant to make payments,” he said.

Barnes said they would make use of cash-in-transit services to deliver cash to pay points for beneficiaries without bank cards.