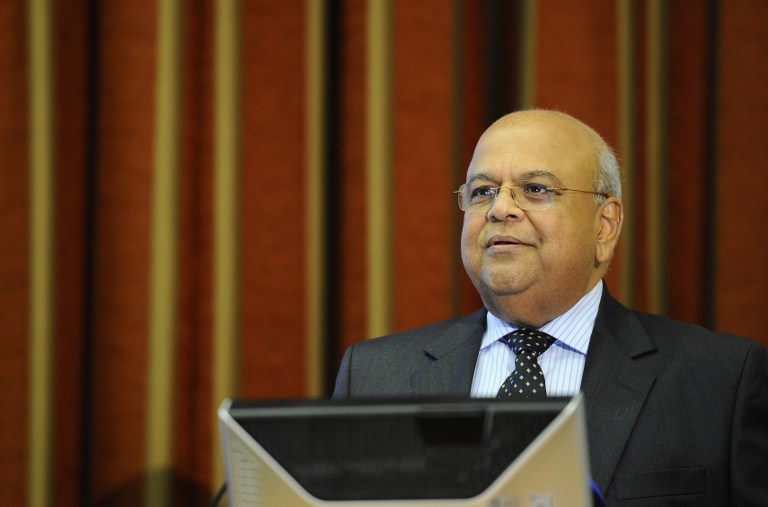 South African Finance Minister Pravin Gordhan delivers a speech during the announcement of a new line of bank notes on February 11, 2012 in Pretoria.

“The presidency has noted the story in the Sunday Times alleging an imminent arrest of the minister of finance,” President Jacob Zuma’s spokesman Bongani Ngqulunga said in a statement.

“We have also noted the response of law enforcement agencies which have swiftly denied the rumour. It is clear therefore that the story is the work of dangerous information peddlers who wish to cause confusion and mayhem in the country,” he said.

Zuma and the whole of government were focused on the goal of reigniting economic growth, preserving existing jobs, and creating more jobs through working together with business and labour.

A lot of progress was being made in this regard as was seen in the outcomes of the meeting convened by Zuma last week, Ngqulunga said.

Earlier, The Sunday Times reported the Hawks want Gordhan to be prosecuted for “espionage” in a case related to the activities of the SA Revenue Service (SARS) “rogue unit” established while he was the tax agency’s commissioner.

The move was likely to plunge the markets back into the turmoil seen in December last year when Zuma fired Nhlanhla Nene as finance minister on December 9, the newspaper reported.

According to senior Hawks sources, the unit had handed over a case docket to the National Prosecuting Authority (NPA) for a decision to prosecute Gordhan and eight other former SARS officials said to have been involved in or have had knowledge of the unit’s activities.

The unit had been accused of illegally gathering intelligence and spying on taxpayers.

Insiders at the Hawks and the NPA told the Sunday Times that they were waiting for the “political go-ahead” before acting, the newspaper reported.

Hawks spokesman Hangwani Mulaudzi reportedly declined to comment, while Mfaku said it was “incorrect that a decision has been made to prosecute anyone. The matter is still under investigation”.

In another statement on Sunday, Democratic Alliance spokesman David Maynier said Gordhan’s arrest would be a disaster for South Africa and “cause an economic earthquake and make ‘9/12’ look like a minor economic tremor”.

“The timing of the rumours could not be worse and will not only cause further turmoil in the markets, but also compromise efforts to avoid a ratings downgrade in South Africa.

“What is worrying is that authorities are reportedly waiting for the ‘political go ahead’ before ordering the arrest of the minister and eight other officials to face charges relating to the SARS ‘rogue unit’,” he said.

This suggested that the investigation was politically motivated and part of Zuma’s fight back campaign and attempt to neuter the National Treasury.

“The only option with any hope of avoiding mutually assured destruction is to appoint a judicial commission of inquiry in terms of section 84 of the Constitution to investigate all the allegations surrounding the so-called SARS ‘rogue unit’,” Maynier said.