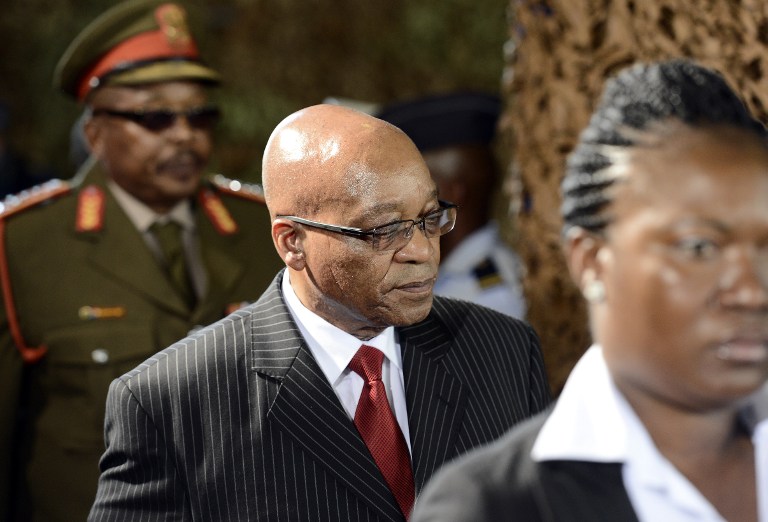 File: President Zuma arrives to attend a memorial service for the South African soldiers who died during a battle with rebels in the CAR at Swartzkop Air Force Base in Pretoria on April 2, 2013.

Pretoria - Presidential spokesperson Mac Maharaj defended South Africa trying to mend relations with the Central African Republic, and said government&39;s decision to maintain relations with the interim leadership, is in line with a regional accord to bring peace and stability to that country.

President Jacob Zuma met with CAR Prime Minister Nicolas Tiangaye , who is part of the country&39;s transitional government, at the Mahlamba Ndlopfu presidential residence in Pretoria on Sunday.

According to Zuma the meeting clarified a number of issues.

"We received the prime minister of the CAR as an envoy from the president currently leading that country. [Michel Djotodia, Seleka rebel leader] had indicated that he would want to send a delegation to come and see me," said Zuma.

"We are very happy with the message [brought by Tiangaye]. We have had a very good discussion with the prime minister. We think it [the Pretoria meeting] has helped to clarify certain things and also to deal with the relations between the two countries."

Part of the transitional roadmap endorsed by the regional Economic Community of Central African States bloc was the formation of a national transition council. That council subsequently elected Djotodia as interim president of the country.

"Once the forces that were fighting President Bozize took over, the leader said the constitution was suspended, as well as parliament and the judiciary. That is the government we said we are not going to recognise, with everybody else," Zuma said.

"There was a regional meeting which changed the status of the [Djotodia] authority. We did not say there was anyone who could not be elected to the transitional authority. The Libreville agreement, which is legal, is what is operating now."

He kept his job when the Seleka rebels made the final push for Bangui, forcing Francois Bozize into exile at the end of March.

Tiangaye is part of the transitional government meant to prepare for elections within 18 months.

On Sunday, Tiangaye said his trip sought to cement bilateral relations between South Africa and his country. Speaking in French, Tiangaye offered condolences for the deaths of 13 South African soldiers on March 23.

"The message I brought is a message of calm and peace. We would like to take that unfortunate incident as a page of history that we will now turn to open a new one,” he said through a translator.

Tiangaye said it was regrettable there had been "a personalised relationship" between South Africa and Bozize.

"We regret that the past relations with the former president [Bozize] were more personalised, and we are now aiming at improving these relations to be more at a state level,” he said.

"It was not the fault of President Zuma or the government of South Africa. It was because President Bozize was hiding the nature of the relationship between the two countries."

He said his visit to Pretoria, with a senior delegation from the strife-torn country, would mark the beginning of a new phase in the relationship.

“We are convinced we have now entered a new chapter and that the relationship will be more transparent to both countries. This is the message that I transmitted to President Zuma and the people of South Africa on behalf of the people of CAR,” he said.