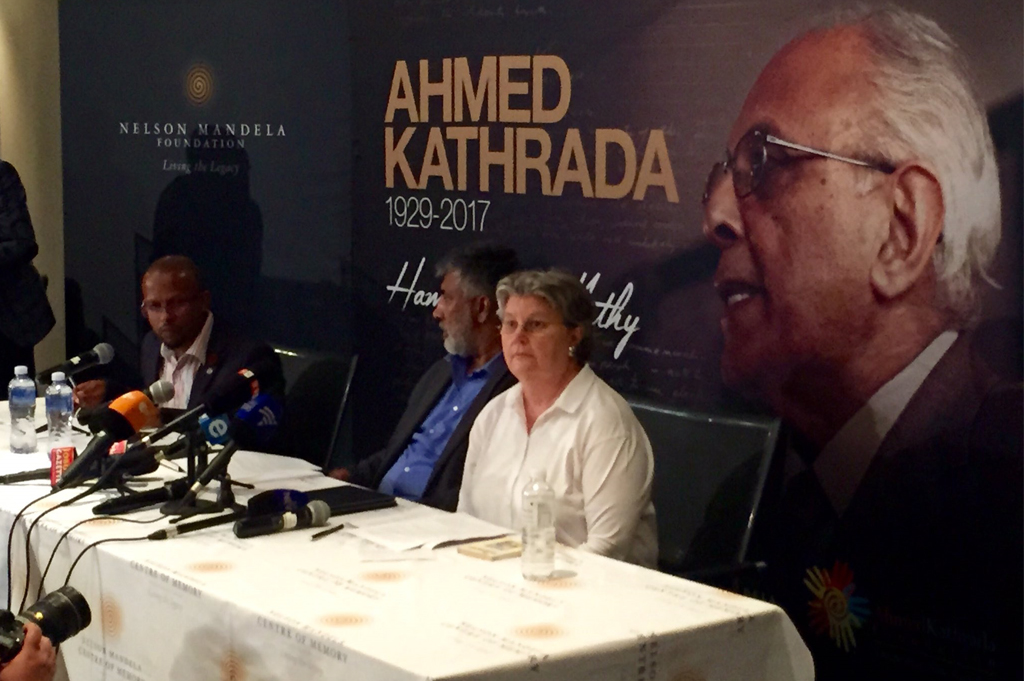 31 March 2017 - Barbara Hogan, wife of the late Ahmed Kathrada, addresses the media at The Nelson Mandela Foundation in Johannesburg on the decision to host a memorial service for the late Struggle stalwart.

JOHANNESBURG - Barbara Hogan, ANC stalwart and widow of the late anti-apartheid stalwart Ahmed Kathrada said she was deeply hurt by President Jacob Zuma’s decision to fire ministers immediately after the funeral of her husband, adding that the president had “gone rogue”.

Zuma defied his own party, the African National Congress (ANC) and went ahead to remove finance minister Pravin Gordhan, she said.

“This means the president is not applying his mind on decision-making about one of the most critical issues in our country…the decision about the team of people to lead our country; that is an indictment of the president when his own are rejecting him…his own party rejects what he has done,” Hogan told reporters in Johannesburg.

“If this is not a defining moment in our history, nothing will be. Looking at the citizens of this country, I think all of us are utterly dismayed. We love this country! That a president can think of withdrawing a finance minister from an important international roadshow …if he thinks he can do that and there will be no consequences for the poor, it shows what an inept president we have.”

#CabinetReshuffle #BarbaraHogan explains why she believes good Members of Parliament should not vacate their position pic.twitter.com/vBKMCTPoWW

She said her family welcomed the memorial service by the Presidency for Kathrada that was billed to take place in Soweto on Saturday. The service has, however, been postponed indefinitely.

“Last night when the news began to filter through about the dastardly deeds that were being done in dark corners of this country, many of us in the family began to have second thoughts about whether we wanted to have a commemoration by a president who had clearly gone rogue, and defied his own party,” she said.

Hogan, who was an ANC Cabinet minister, said she was angered after hearing about the changes in Zuma’s executive.

“This says to us that the president is willing to push ahead with his personal agenda of greed, corruption and self-interests regardless of the sentiments in this country. We did not fight for that and do not accept that.”

She added that since Kathrada wrote a public letter this time a year ago asking Zuma to resign, the president could have held off before reshuffling his Cabinet in the week that Katharada died.

The Ahmed Kathrada Foundation director, Neeshan Balton said they were shocked to hear of the postponement of the memorial service.

“This was cancelled without any consultation whatsoever with his wife, the family and the foundation. We have discussed this memorial with the Presidency over the last few days and immediately after the funeral, so it came as a shock that it was postponed without reasons given.”

“We view this conduct by the president, at exactly one year after Kathrada’s letter, as unacceptable. The memorial would have been an ideal opportunity for the State to pay homage to Kathrada who, for three quarters of a century selflessly sacrificed his life for the people,” Balton added.

He condemned the firing of Gordhan and urged MPs and political parties to unite and pass a motion of no confidence against Zuma in Parliament.

In the light of the cancellation of the State memorial service, the foundation would hold its own commemoration for Kathrada at Johannesburg’s city hall at 2pm on Saturday. Gordhan and Hogan would be among the speakers, Balton said.