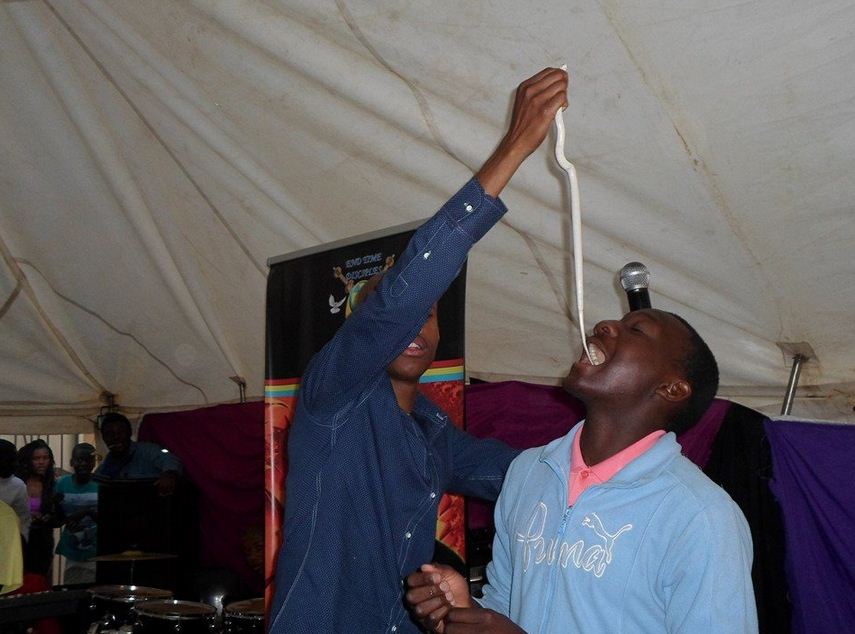 A post on Facebook as revealed a prophet who commands rocks into bread and cloth to taste like chocolate and turns snakes into chocolate and feeds these to his congregation.

JOHANNESBURG – A post on Facebook claims to show Prophet Penuel Mnguni of the End Times Disciples Ministries in Soshanguve, Pretoria turning rocks into bread and snakes into chocolate which he feeds to his congregation.

In May, Mnguni, 24, was in the news with reports that he claimed to have turned members of his congregation into snakes.

He hit the headlines after asking members to remove their clothes before praying for them.

Pictures on the church&39;s Facebook page showed the so-called prophet standing over members of his congregation as they writhe on the ground with their tongues sticking out after he "commanded the spirit of snakes to enter (them)".

In the recent incident he is shown with a foot on a rock and some of his congregates eating from it. He is also shown feeding congregants pieces of cloth and a snake.

Mnguni is reportedly the understudy of Rabboni Ministries Prophet Lesego Daniel, who notoriously made his congregation eat grass and drink petrol.

According to Rabboni Ministries&39; website Mnguni started his own church in Maech 2014 after he received leadership training from  Daniel.

The posts were flooded with mixed comments with some saying it is proof of his divinity and other saying he is a false prophet using miracles to trick people.

Sunday Service 12 July 2015 Demonstration The man of God called a guy called Thabiso and by the power of God he...