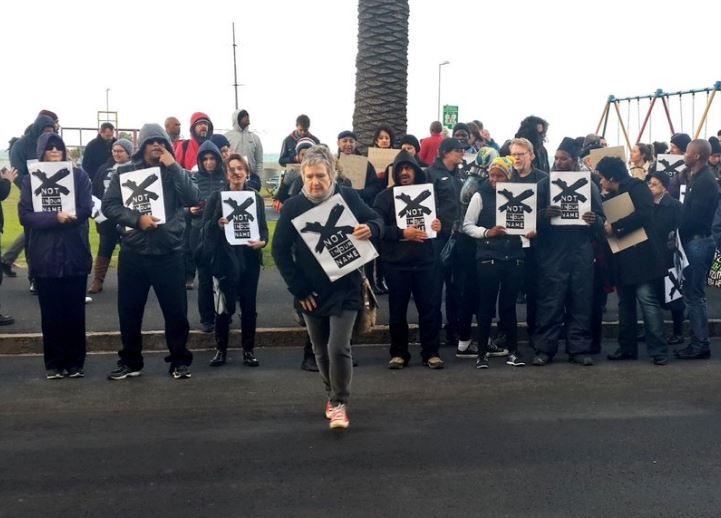 A group of journalists gathered outside SABC offices in Cape Town.

JOHANNESBURG - The South African National Editors’ Forum (Sanef) has urged all journalists to wear black and support the BlackFriday protest against the South African Broadcasting Corporation (SABC), which has sparked controversy with its moves to censor some news content.

Sanef is among the concerned organisations and ordinary citizens who are demanding the immediate reinstatement of all the suspended journalists and the scrapping of the public broadcaster’s “illegally revised” editorial policies.

Several journalists have been suspended for raising their objections to new editorial policies that have been described as censorship.

Acting CEO Jimi Mathews resigned in protest over developments at the SABC, which he said were wrong.

The Save Our SABC Coalition will also picket outside the SABC studios in Sea Point and Auckland Park in Johannesburg.

Outa, the organisation that opposes e-tolls and now tackles tax anomalies, said on Friday it was joining the picket in Johannesburg.

SABC COO Hlaudi Motsoeneng went on record as saying detractors should leave the SABC alone and that he would not bow to pressure to allow journalists to report on violent protests or stories that would reflect negatively on President Jacob Zuma.

The Right2Know campaign’s media freedom organiser, Micah Reddy, said Motsoeneng’s interference in the editorial policy was one of the issues that had plunged the SABC into a downward spiral.

“Hlaudi Motsoeneng and  the cabal there has shown absolute contempt not only for the public, but for those who work under them as well."

In front of the SABC in solidarity with our colleagues inside & in protest of SABCcensorship. @AfriNewsAgency pic.twitter.com/1xbywBSTY3

SABC protestors say they support the suspended journalists & their suspensions must be lifted. BlackFriday pic.twitter.com/waW0aWt3mW

Chanting "Hlaudi must fall" as cars drive past and hoot in support eNCA BlackFriday pic.twitter.com/nZxkhpCBWr