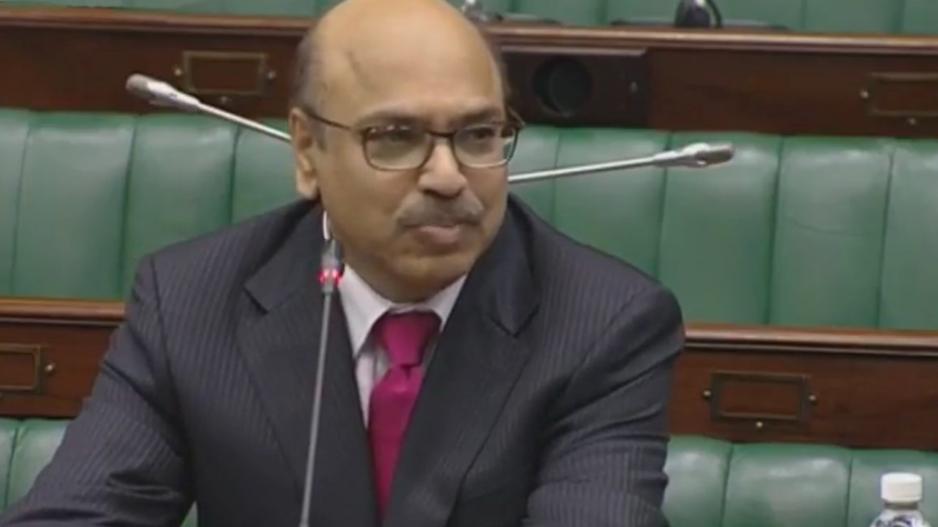 11 August 2016 - Judge Siraj Desai, the fourth candidate to be interviewed for the role of Public Protector.

PARLIAMENT - Judge Siraj Desai began his bid to become the next Public Protector by stressing his struggle credentials during his interview on Thursday.

“I have been an activist for almost four decades,” Desai said, before describing his childhood in District 6 and saying it shaped his world view.

“I was in standard seven when District 6 was declared a white area. I saw the disintegration of the community which impacted on my entire life.”

He said once he completed high school, being Coloured prevented him from continuing his studies in the Western Cape, but being forced for that reason to attend university in Durban resulted in meeting Black Consciousness leader Steve Biko, who influenced his views.

"I&39;ve been an activist for more than 4 decades." - Siraj Desai PublicProtector

Desai, who is viewed by opposition parties as the ruling African National Congress’ (ANC) favoured candidate to take over from Thuli Madonsela, said that if he was chosen he would view it as his task to turn the office of the Public Protector into a “pillar of democracy”.

"Job as the PublicProtector is the defence of democracy. My life experience makes me well disposed to interpret the job of a PP." - Desai

MPs from the Democratic Alliance proceeded to pepper Desai with questions about his poor health, allegations of sexual assault brought against him in India in 2004 and reports of frequent clashes with peers in the legal profession.

The DA’s Werner Horn suggested that Desai changed his account of events in Mumbai that led to the complaint to the Indian police that was later withdrawn, and had therefore, on at least one version, “lied.”

DA MP Werner Horn brings up Rape allegations against Judge Desai in Mumbai in 2004. Desai objects, trying to say the charge was withdrawn.

Desai countered that a statement leaked to the press by Indian police had been wrongly attributed to him.

“It is an absolute lie to suggest that I changed my version. I was acting on legal advice right from the beginning… Any criticism of me on that Mumbai incident, is based on speculation,” he added.

Desai on rape allegation: I was never acquitted, I was not convicted either. The allegation was withdrawn under oath." PublicProtector

In response to the DA’s questions about arguments with colleagues, including Western Cape Judge President John Hlophe and Judge John Foxcroft, Desai said: “I have never been a popular judge.”

Turning to his tearoom spat with Foxcroft, who sent cleric and United Democratic Front luminary Allan Boesak to prison for fraud, Desai said he had silently listened how several white judges congratulated Foxcroft after the sentence.

He said Foxcroft then remarked to him, who had several times defended Boesak when he was targeted by the apartheid regime over his political activism, “Your former client is a very arrogant man.”

At this, Desai said he became angry and told Foxcroft that the real problem was the “arrogance of the white middle class”.

"I never expressed or gave any view as to what happened that night. I&39;ve never been a popular judge with white judges of the old order."

DA MP Phumzile van Damme asked Desai whether his health problems would not hamper his ability to head the chapter nine institution.

Desai quipped that he was a socialist and therefore determined to die “with my boots on”.

Desai on his reported ill health, "Actually, I&39;m a socialist. And we&39;re supposed to die with our boots on" PublicProtector

He said he had fully recovered from leukemia and though he had diabetes and shingles, his doctor had told him that his health should not be a problem.

He is one of 14 candidates who were being interview throughout Thursday by the parliamentary ad hoc committee that must nominate a successor to Madonsela, for approval by the National Assembly.

Madonsela found herself on a collision course with the African National Congress (ANC) as she pursued investigations against government departments, ministers and most notably President Jacob Zuma.

His reluctance and that of Communications Minister Faith Muthambi to heed her findings, lead to rulings in the Supreme Court of Appeal and the Constitutional Court confirming the binding nature of the Public Protector’s directives.

"The PublicProtector must be completely independent of the state. You don&39;t sing to the hymn sheet of the Govt, or the opposition" - Desai

Desai ventured that the Constitutional Court’s pronouncement in the Nkandla case had strengthened the standing of the office of the Public Protector.

“The judgment of the Constitutional Court makes it far more powerful,” he said.

Desai is proud he worked another job as chair of the parole. "I&39;ve released life offenders, who&39;ve not reoffended again." PublicProtector

"I&39;m proud of my training in political thinking. That&39;s why i possibly react strongly to people." Desai PublicProtector