Purported photo of Mandela's body on Twitter a fake 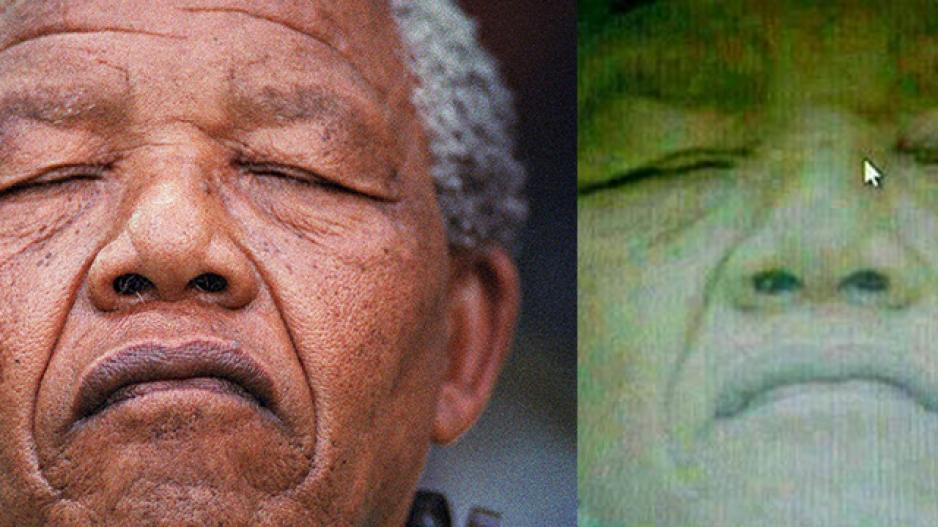 The image of former president Nelson Mandela that is a purported to be a fake of his body compared to the original one from which the image was taken.

JOHANNESBURG  - A picture, purportedly of former president Nelson Mandela&39;s face as he lies in state at the Union Buildings in Pretoria, that was posted on Twitter yesterday, has been deemed a fake.

The photo, uploaded on the profile of a person called @nQOW_bee before midnight on Wednesday, allegedly showed the former leader&39;s face with his eyes closed.

However, whether it was taken at the Union Buildings was not immediately apparent.

Government&39;s communications division released a statement by the Department of State Security, which confirmed the image was fake.

The picture appeared to be a grab from a computer screen, as a mouse cursor could be seen above the face. The eyes did not seem to be closed in a comfortable fashion, while the mouth appeared to be frowning.

The tweet along with the photo read: "He is resting".

"Mandela was not this young... this is a photo shop," tweeted Veeona.

Others lambasted the photographer.

"U have no respect at all how could u post such a thing? U should be ashamed of urself [sic]," Thobeka Matosa tweeted.

Ntsindiso said: "How can you take a picture of a corpse, you are sick!"

The user claimed the photo was taken by "some Indian guy".

It was retweeted nine times by 2.30pm on Thursday.

Government spokeswoman Phumla Williams had earlier said that government was aware of "social media activity" on the existence of a picture of Mandela lying in state.

"Government welcomes the way in which people on social platforms are expressing their disappointment and outrage at any circulation of such photographs," she said.

"If this content exists, government calls on people not to view it and to delete it from their [social media] timelines."

She said there were no plans to release official photographs of Mandela lying in state.

"Government is respecting the [Mandela] family&39;s wish that no photographs of [former] president Mandela&39;s body be released," Williams said in a statement.

"With regard to mourners filing past the casket, government repeats the caution that no photography is allowed, as this would violate the military protocol governing proceedings at the Union Buildings."

Mandela family spokesman Lt-Gen Themba Mathanzima told The Star newspaper that the family was very concerned about the picture.

"We don&39;t know who did this, but we are going to be asking the government to investigate," Mathanzima was quoted as saying.

"That picture was definitely not taken with our permission. The family is outraged."

Mandela died at his home in Houghton, Johannesburg, last Thursday, at the age of 95. An official memorial service was held at FNB stadium, in Soweto, on Tuesday. He will be buried at Qunu, in the Eastern Cape, on Sunday.

Media Statement - No Photograph of President Mandela Lying in State