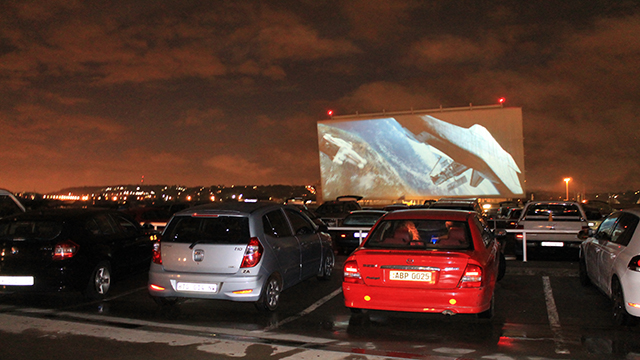 Pretoria A view of the Menlyn Park drive-in theatre. The out-door movie theatre is the last left in SA and will be closing in February 2014.

PRETORIA – The smell of buttery popcorn and a lively atmosphere of excited people reminds me of one thing: Going to the cinema.

But here at the drive-in there are no queues for movie tickets. Instead there are cars waiting in line to enter the Menlyn Park roof top drive-in theatre.

I remember back in the early 90’s when I would excitedly get ready to head to the drive-in with my parents.

Wedged between the front seats with tons of snacks, I always eagerly waited for the movie to begin.

Decades later I found the drive-in nostalgic, taking me back to those days when going to the movies was an excursion rather than just another recreational activity.

It’s sad to say that South Africa&39;s last drive-in -- which has been running for 13 years -- is closing down due to technical restraints.

"All cinemas in the country have switched over to a digital system in the past year. The drive-in still functions on a film-projection system and the availability of these reels is extremely scarce," said Menlyn Park&39;s marketing manager, Andrea de Wit.

"The size of our screen and the distance of projection are also obstacles in switching to a digital system."

Drive-in theatres have been a part of many South Africans’ childhoods, with many having grown up and cherishing those moments spent with family.

Matthew Pretorius says heading to the drive-in was an experience he will never forget.

“The drive-in has left me with memories of family outings that I will always cherish," said Pretorius.

"It was an experience, not just a movie.”

Sumeshnee Pillay (24) -- who grew up in Durban -- also remembers the drive-in as a family outing and is saddened by Menlyn drive-in&39;s closure.

“I used to really look forward to going with my family to watch a movie. It was a really nice experience as a child and I feel like the next generation will be missing out," said Pillay.

"It was a great way of spending time with the family but all good things have to come to an end, I guess.”

And it isn’t just a “childhood experience” that will be lost with the ending of the out-door film era, but also another form of a romantic gesture.

De Wit says that there were “quite a few” proposals, proving that times may have changed but the drive-in was still a popular place for couples to head to on dates.

The drive-in ended its last week with two movies.

The first was the 2013 sci-fi thriller "Gravity" starring Sandra Bullock and George Clooney, and the second was the hilariously funny “We’re the Millers” with Jennifer Aniston and Emma Roberts.

It was no surprise that the number of patrons increased in the last week to not only experience the drive-in for the last time, but to watch two blockbusters free of charge.

De Wit said the space will be repurposed and assures shoppers that the rooftop will continue to be a recreation and entertainment area.

“We can’t make the big announcement just yet, but we are looking forward to welcoming an alternative entertainment offering which should be opening in the second half of the year.

"It will also be a Pretoria first,” she said.

If you’re a sentimental buff like me, then Friday night is your last chance to catch the final screening ever at a South African drive-in theatre.

Goodbye drive-in era, you will never be forgotten.