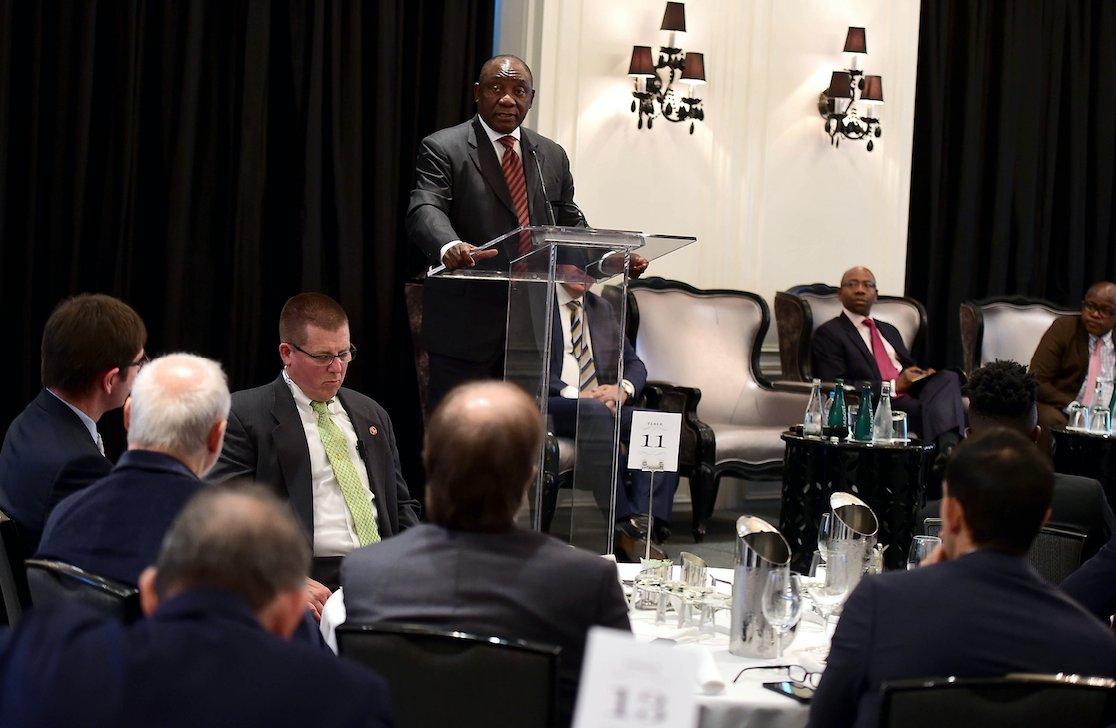 President Cyril Ramaphosa engaging with investors ahead of his participation at the G7 Summit Outreach in Toronto, Canada.

JOHANNESBURG – Land reform and foreign investment are high on the agenda for President Cyril Ramaphosa for his visit to the G7 in Canada.

The global economy is showing signs of recovery and improved growth, but remains vulnerable with a global trade war looming; a return to protectionism; and the weakening of the multilateral rules-based international trade system, Ramaphosa said on Friday.

However, South Africa sees Canada as a strategic partner in navigating these difficulties, he added.

"South Africa has entered a new dawn, a new era in which our economy occupies centre stage. Business confidence and investor sentiment is improving. Government is responding to create a dynamic and enabling business environment that will promote greater productive investment," Ramaphosa said in a speech prepared for delivery at the South Africa-Canada Investor Engagement in Toronto, Canada on Friday.

President Cyril Ramaphosa in Toronto engaging with investors and business people ahead of his participation at the G7 Summit Outreach pic.twitter.com/lj9wmfOcEG

"South Africa is undertaking measures to set the economy on a new path of growth, employment and transformation. We are moving swiftly to restore credibility, improve governance and implement turn-around strategies at South Africa’s state-owned enterprises."

Ramaphosa arrived in Toronto on Friday, to participate in the G7 Leaders’ Summit Outreach to be held in Qubec City under the theme “Healthy, Productive and Resilient Oceans and Seas, Coasts and Communities”.

In his address, Ramaphosa said that South Africa was looking to Canada as an important source of investment, partnership, and collaboration in the mining sector because the two countries are major global mining nations.

"Our aim is to unlock the economic potential of our country, which has been constrained for decades by policies of racial exclusion. For generations, black South Africans were denied opportunities to own assets, establish businesses, acquire skills and enter professions," Ramaphosa said.

"Nowhere was this more apparent than in the patterns of ownership and usage of land. The extreme concentration of ownership of land is one of the great impediments to the full realisation of our country’s potential. We have taken a decision to accelerate land reform, including land redistribution and ensuring security of tenure for the rural poor," he said.

"This needs to be done through a range of measures, which will include, in appropriate circumstances, the expropriation of land without compensation. We are determined that this should be achieved in a manner that is consistent with our Constitution, enhances agricultural production and food security and promotes economic development," he said.

READ: MPs to hear from experts on land expropriation

Ramaphosa said that South Africa is certain that the land reform programme will enhance the country’s economic capacity and improve its attractiveness as an investment destination.

"As it stands, our investment law provides significant guarantees to both domestic and international investors. South Africa has a number of attractive sectors such as mining, oil and gas, shipbuilding, agro-processing, advanced materials, innovation and clean tech, tourism and financial services, among others."

Ramaphosa said that the latest economic growth figures for the first quarter of 2018 show that the mining, agriculture and manufacturing sectors remain under pressure.

But he added that the figures showed that service industries are resilient. He said they demonstrated that greater and more sustained growth required decisive measures to address the key structural challenges in our economy.

"We are, therefore, investing significantly in our education and skills development programmes, using our competition policies to create opportunities for market entrants, reducing the cost of business and developing our economic infrastructure," he said.

"Government is working with urgency to guide the economy towards a more sustainable growth trajectory and to restore South Africa to investment grade status. Government, private sector, labour and civil society are working together on a social compact to create jobs, particularly for young South Africans. We are working to significantly increase the levels of fixed investment in the economy."

He said South Africa has embarked a new path of renewal and growth, saying that the country is hard at work to remove the constraints that have held it back and to create new opportunities for growth.

"South Africa is open for business. We anticipate a new wave of investment in our economy and in our region over the next few years. We encourage Canadian companies to join that wave and to reap the rewards of investing in a country and a continent on the rise."

The Presidency said Ramaphosa would participate in the two-day session by the summit host, Canadian Prime Minister Justin Trudeau.

"President Ramaphosa’s participation in the G7 Leaders’ Summit Outreach coincides with his drive to attract investment to grow the economy, create jobs and address poverty and inequality in South Africa," his office said.

"President Ramaphosa will commence his visit by engaging with investors and business people in Toronto. The President is accompanied by Environmental Affairs Minister Edna Molewa and a business delegation from South Africa."

The G7 consists of Canada, the United States, Japan, the United Kingdom, Germany, France and Italy. Other states whose leaders have been invited to participate in the Leaders’ Summit Outreach include Kenya, Senegal, Rwanda, Seychelles, Haiti, Bangladesh, Vietnam, Samoa, Argentina, Norway and Jamaica.